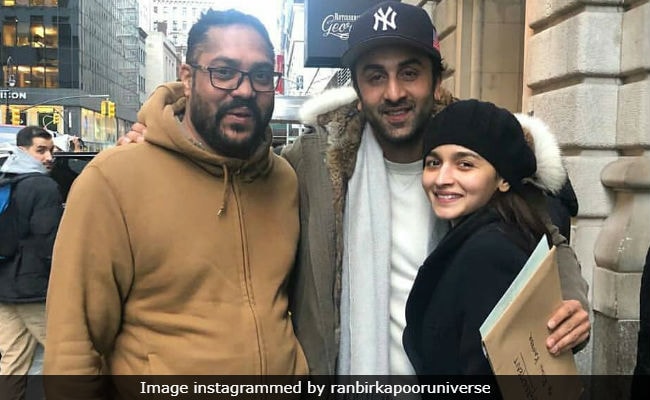 If you're a fan of Ranbir Kapoor and Alia Bhatt, then now is a good time to take a trip to New York as you may be the next lucky fan to bump into them while strolling the city. Ranbir Kapoor's fan club shared two pictures of two different fans of the Sanju actor meeting him while in the streets of the Big Apple. One fan met Both Alia and Ranbir while another got a picture just with the actor. Alia Bhatt and Ranbir Kapoor found a spot on the list of trends on Friday after the pictures went viral. Alia Bhatt rang in the New Year's with Ranbir Kapoor and his family in New York. Ranbir's father Rishi Kapoor is receiving medical treatment in NYC for the past few months. On Christmas, Rishi Kapoor's daughter Riddhima arrived with her husband Bharat and their daughter Samara and by the New Year's Eve Ranbir also joined them with Alia Bhatt.

Here are pictures of Ranbir Kapoor and Alia Bhatt in New York, which are circulating on the Internet:

A post shared by Ranbir Kapoor Universe (@ranbirkapooruniverse) on Jan 3, 2019 at 5:28pm PST

Ranbir Kapoor and Alia Bhatt are in the middle of filming Brahmastra, a trilogy, the first part of which is slated for release this year. Reports of Alia Bhatt dating Ranbir Kapoor started doing the rounds on social media last year after they arrived for Sonam Kapoor and Anand Ahuja's wedding reception together. Alia and Ranbir have neither confirmed nor denied when asked if they were dating and have treated the subject with absolute diplomacy.

Ranbir Kapoor was last seen in 2018's super hit film Sanju. Apart from Brahmastra he also has YRF's Shamshera in the pipeline. Alia Bhatt will be next seen in Gully Boy, releasing on February 14. The film's teaser dropped on the Internet today while the trailer will be out on January 9.