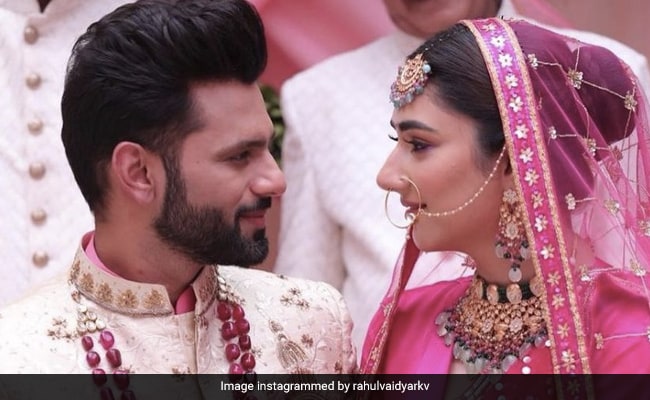 Singer Rahul Vaidya and his girlfriend  Disha Parmar started trending big time on Friday, courtesy their latest Instagram entries. They shared identical pictures on their respective Instagram profiles, in which they can be seen dressed as a bride and a groom. They both captioned their posts: "#newbeginnings #madhanya." While a section of the Internet congratulated the couple, other fans thought it was a still from their upcoming music video titled Madhanya." Singer Bhoomi Trivedi commented: "Oh God! Waiting for the real one soon." "Is it from the song?" asked a fan on Instagram. "Is this for real?" read another comment. "Can't wait," added another fan.

The singer proposed to actress Disha Parmar on her 26th birthday last year. A few months later, on Valentine's Day, Bigg Boss sent the actress in the house. An excited Rahul Vaidya asked her once again if she would marry him and she said yes.

In an interview with ETimes last month, the singer revealed that he and Disha will get married in a few months. "We are still in the process of finalising a date, but marriage will happen in three to four months," Rahul Vaidya said.

Rahul Vaidya became a household name after participating in the first season of the singing reality show Indian Idol. He has sung tracks like Do Chaar Din, Keh Do Na, Tera Intezaar, Aabhas Hai and Yaad Teri among others.