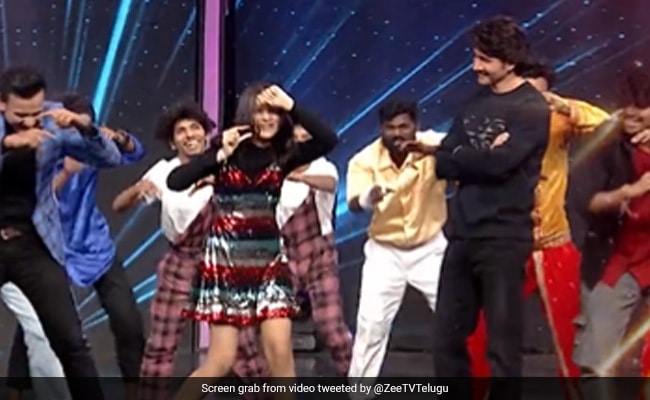 Sitara and Mahesh Babu in a still from the video. (courtesy: ZeeTVTelugu)

Superstar Mahesh Babu recently checked into the sets of the dance reality show Dance India Dance Telugu and guess who accompanied him there? His 10-year-old daughter Sitara. In a promo video from the episode shared by Zee Telugu's Twitter handle, Sitara can be seen dancing on the stage and Mahesh Babu's reaction to his daughter's performance is priceless. He can be seen flashing an ear-to-ear grin as his daughter performs. The father-daughter duo checked into the sets of the show walking hand-in-hand. In no time, the video started trending on social media.

Never Before Ever After
' @urstrulyMahesh & #Sitara

Mahesh Babu, son of Telugu actor Krishna, started his career as a child artiste with 1989 film Poratam, featuring his father. He also starred in his father's films Sankharavam and Bazaar Rowdy among others. Mahesh Babu made his full-fledged silver screen debut with 1999 film Raja Kumarudu opposite Preity Zinta. He went on to feature films like Athadu, Pokiri, Athidhi, Dookudu, SPYder, Bharat Ane Nenu and Maharshi, to name a few. He was last seen in Sarileru Neekevvaru. He also starred in Sarkaru Vaari Paata

Namrata Shirodkar, who was Miss India 1993, is best-known for her performances in Hindi movies like Kachche Dhaage, Pukar, Astitva, Albela and Dil Vil Pyar Vyar. She has also featured in Kannada, Telugu and Malayalam films. She also starred in 2004's Bride And Prejudice. She is married to Telugu superstar Mahesh Babu, whom she met while filming 2000 film Vamsi and the couple are parents to a son named Gautham and daughter Sitara.