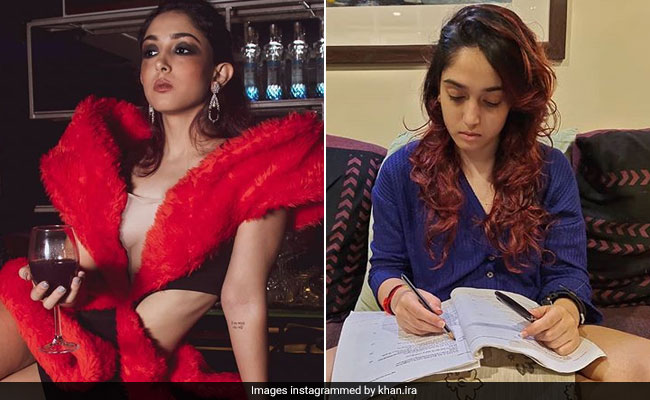 Aamir Khan's daughter Ira Khan occupied top spot on the list of trends on Sunday after her "Saturday night" expectation vs reality pictures surfaced on the Internet. Ira Khan, on Saturday, shared a couple of pictures on her Instagram profile, which are going crazy viral on social media. In the first two photos, Ira looks stunning in a black and red fur dress. With Kohl-rimmed eyes and silver earrings, Ira Khan can be seen posing with a wine glass. But that's not the picture we are talking about. It's her third picture, which will leave you in splits. In the last photo, she can be seen sitting on her couch wearing basic clothes and occupied with her work. All we can say is Ira's de-glam look on Saturday night is totally relatable.

Hazel Keech, who is all set to collaborate with Ira Khan for her theatrical production Medea, which is based on Euripides' tragedy of the same name, also dropped a comment on the latter's post. "Hot damn girl," she wrote.

Ira Khan's fans flooded her posts with comments such as "LOL" and "Really funny." "Last one is epic," wrote one user on Instagram while another commented: "Truth of talented people."

Ira Khan, who is ready to debut as a director with 'Euripides Medea,' said that she prefers to work behind the camera. In an interview with Hindustan Times, she said: "I've always felt more comfortable and enthusiastic about working off-stage or behind the camera rather than being in front of it."

Ira Khan was born to Bollywood actor Aamir Khan and his first wife Reena Dutta. She has studied music while her brother Junaid often assists his father in filmmaking.