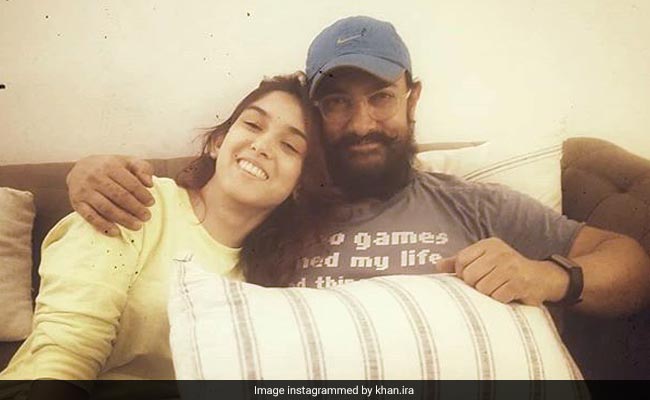 Aamir Khan's daughter Ira is currently busy directing the adaptation of Euripides' Medea and to unwind, Ira dropped in at her father's Pali Hills home to spend some father-daughter time together. Ira shared a picture of herself with Aamir, both looking extremely happy and relaxed, and she captioned it, "Couch-buddy! #downtime #fatherdaughtertime #couchpotato #smile #cuddles." Ira Khan, Aamir's daughter with his first wife Reena Dutta, is currently directing her first play Medea, which features actress Hazel Keech in the titular role. Most of Ira's recent Instagram posts spill the beans on the work-in-progress play.

Here's a glimpse of Ira chilling with her father Aamir Khan:

Now-a-days, Ira Khan features in headlines for her theatrical production Medea, which is based on Euripides' tragedy of the same name. Recently, Ira revealed that she signed Hazel Keech for the lead role and the actress in turn said that she was 'doubly excited' about starring in the play. "This is doubly excited because A. I'm back to theatre, my first love and B. My sweet little Ira Khan is directing it!!!! I'm impressed more and more each passing day with her clarity and conviction of what she wants and is trying to achieve," Hazel Keech wrote.

After being away from theatre for almost a decade im back in the Greek Tragedy Medea.... playing Medea!!! This is doubley excited because A. Im back to theatre, my first love and B. My sweet little @khan.ira is directing it!!!! Im impressed more and more each passing day with her clarity and conviction of what she wants and is trying to achieve and by her confidence and self esteem she has at such a young age. Im so proud to be working with you on this Tich, love you Posted @withrepost @khan.ira SHE SAID YES! It's amazing to get to work with you, as a friend but more importantly as an actor, @hazelkeechofficial . I can't wait to see what we make @medeatheplay @photographybyroozbeh . . . #medea #medeatheplay #euripides #hazelplayingmedea #anautankisaproduction #entropy #friends #workingwithfriends #workisplay #whoneedsasociallife #play #shesaidyes #excited

Before Medea, Ira Khan was occupied with a quirky photoshoot, the theme of which was self-exploration.

Meanwhile, Aamir Khan is busy with work-in-progress film Lal Singh Chaddha, the Hindi adaptation of Tom Hanks' Forrest Gump. He also has Mogul, based on the life of T-Series founder Gulshan Kumar, in the pipeline.