At the press conference, FWICE said notices will be sent to those who have been implicated in accounts of #MeToo survivors within the next 24 hours 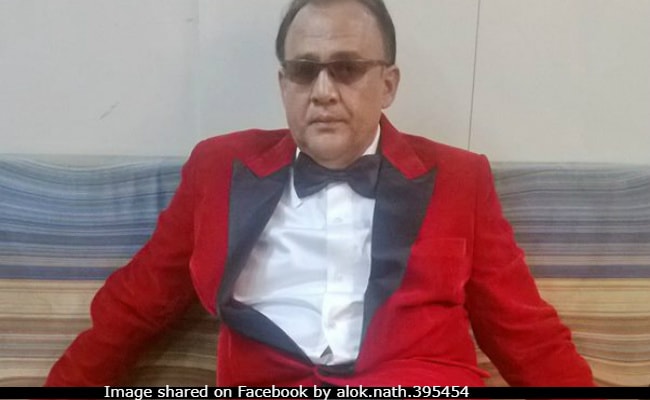 Alok Nath has been accused of rape and harrasment (courtesy alok.nath.395454)

"Nothing happened in 2008 when Tanushree Dutta complained, let's not go into the past," said Federation Of Western India Cine Employees or FWICE as it addressed the #MeToo wave in the Hindi film industry at a press conference in Mumbai on Wednesday. The #MeToo movement has taken the film industry by storm after Ms Dutta revived a decade-old controversy with sexual harrasment allegations against Nana Patekar two weeks ago. Other prominent celebrities who have been implicated in #MeToo accounts include actor Alok Nath, filmmaker Vikas Bahl, singer Kailash Kher and poet-lyricist Vairamuthu, among others. FWICE's statement follows promises of measures to be taken by film associations such as Mumbai Academy of the Moving Image or MAMI, Cine And TV Artistes' Association or CINTAA and Indian Film And Television Directors' Association or IFTDA, which is directly affiliated to FWICE.

At the press conference in Mumbai, FWICE said notices will be sent to all those who have been implicated in accounts of #MeToo survivors within the next 24 hours asking them to respond within the next 10 days. On failing to do so, the film body will have every right to boycott them. "No matter how big the name is, the federation has decided to take action against them," they said.

CINTAA has already issued a legal notice to Alok Nath, who has been accused of rape and harassment by Vinita Nanda, the writer of his Nineties' TV show Tara. While the show-cause notice from CINTAA asks him to explain why he should not immediately be expelled from the film body, FWICE has asked Mr Nath to respond to the accusations, else he will be boycotted by the association. "We extend you full support," actor Sushant Singh, a CINTAA official, tweeted to Vinta Nanda. Following Vinta Nanda's rape allegations, the Producers Guild of India has also pledged support for #MeToo survivors. Meanwhile, Alok Nath in his defence told ABP News, that he neither 'denies nor agrees with Vinta Nanda's allegations and that 'only what a woman says will be considered.'

Meanwhile at the press conference, FWICE chief Ashoke Pandit said he would have the controversy involving Tanushree Dutta and Nana Patekar investigated further before the film body takes a call on the matter. "Want Nana Patekar to be heard," said Mr Pandit, adding: "Have my reservations on Tanushree Dutta's controversy". "Casting couch is in every industry," added Ashok Pandit. Tanushree Dutta named and shamed Nana Patekar for allegedly harassing her on the sets of 2008 movie Horn 'OK' Pleassss, following which the veteran actor cancelled a press conference in Mumbai as legal advice from his team of lawyers.

Earlier, CINTAA had issued an apology to Tanushree Dutta, admitting they failed to address her complaint filed 10 years ago. But later, a CINTAA official told news agency PTI that they are willing to investigate this time if Ms Dutta wants. Meanwhile, Nana Patekar has filed a defamation case against Tanushree Dutta, who has also reached out to the Maharashtra Women Commission. He continues to deny the allegations and told the media: "I would say what I said 10 years back, the truth doesn't change."

At the press conference, FWICE also said they will work towards ending sexual harassment in the film industry and ensuring safe workplaces in offices and on sets and one of the ways of doing so is by aiding their employees with legal support and counselling: "Let us all fight this menace together." Read their full statement here: 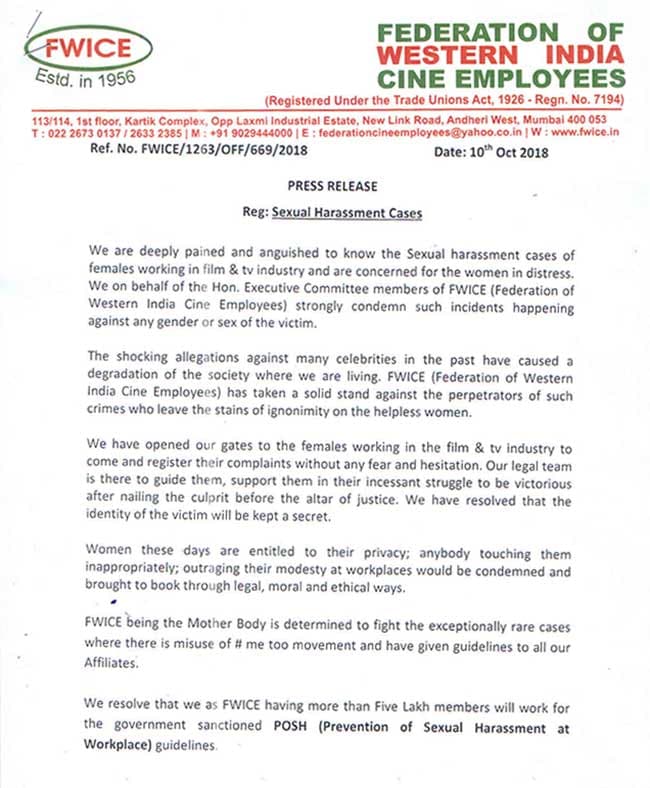 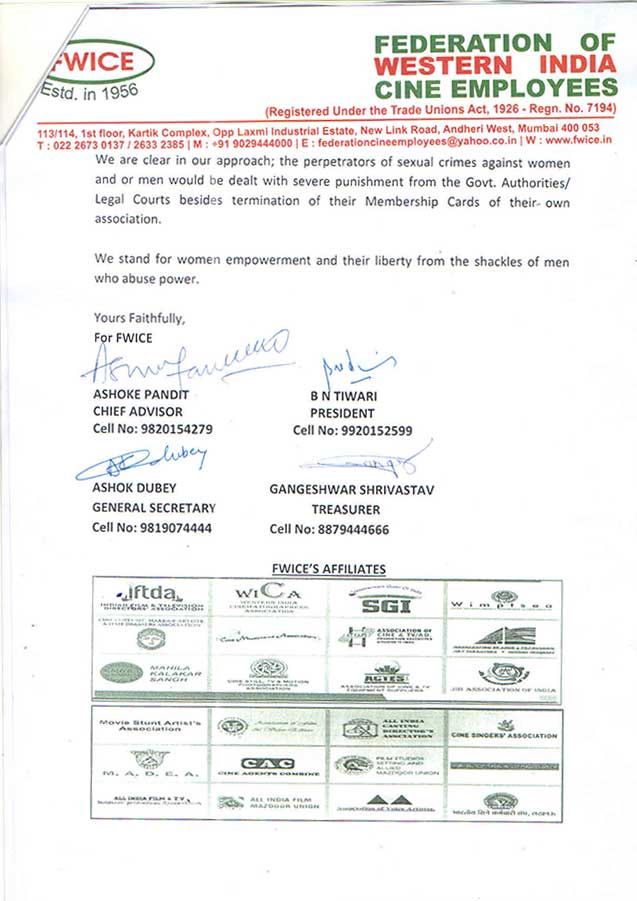 Apart from Alok Nath and Nana Patekar, Vikas Bahl, Kailash Kher and Vairamuthu have responded to the allegations of sexual harrasment against them. While Vikas Bahl have issued a notice to Anurag Kashyap and Vikramaditya Motwane, who 'named and shamed' him, Kailash Kher offered an apology of sorts. Meanwhile, Vairamuthu has denied the allegations made against him, primarily by Chinmayi Sripaada, as untrue.

In solidarity with the #MeToo survivors, MAMI has dropped two films from the line-up of their upcoming film festival. One is Kadakh, which stars actor Rajat Kapoor, who recently apologised after sexual harassment allegations, and the other is Chintu Ka Birthday, film produced by comedy conglomerate AIB, which has resurfaced several times in #MeToo allegations. Former AIB member Utsav Chakraborty has been accused by women of sending them perverse texts while Gursimran Khamba has been accused of harassment. AIB co-founder Tanmay Bhat, who acknowledged that he knew of Utsav's alleged misconduct and did nothing, has 'stepped away' from the collective.