"It's easy to make these allegations. That too of an incident, which is alleged to have taken place 19 years back," said Alok Nath's lawyer 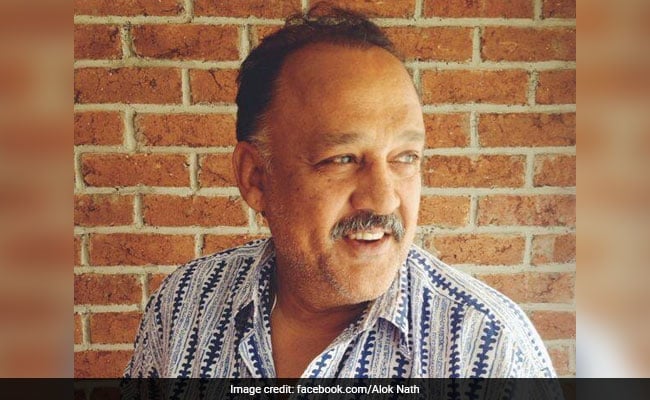 A day after Alok Nath told ABP News he could 'neither deny nor agree with' writer-producer Vinta Nanda's accusation that he allegedly raped her almost two decades ago, his lawyer has dismissed the allegations as 'false' based on the passage of time, news agency ANI reports. He also accused Ms Nanda of attempting to 'defame his (Alok Nath's) reputation' and spoke of a 'legal battle.' Alok Nath has been accused of raping and brutalizing Vinta Nanda and later making it difficult for her to get work. Two other women have also come forward with their alleged #MeToo experiences with Mr Nath - actress Sandhya Mridul and a woman who worked on the crew of Hum Saath Saath Hai.

"It's easy to make these allegations. That too of an incident, which is alleged to have taken place 19 years back. Now, this by itself shows that the entire allegations are false on the face of it. A person will never wait on a period of 19 years to make the allegations," said Alok Nath's lawyer Ashok Sarogi, reports ANI. "I believe that this all has been done only to defame his reputation and nothing beyond that," he added.

Mr Sarogi also said that Alok Nath is not speaking to the press on his advice: "Since we are planning to have a good legal battle, it has been advised that he does not come before the media." Mr Sarogi claimed that Mr Nath will sue Vinta Nanda for defamation in a day or two.

Vinta Nanda's heart-breaking account of alleged rape and violation followed by a personal downward spiral that lasted years has shattered social media. The Cine And TV Artistes Association has promised her 'full support' in the event of a formal complaint against Mr Nath. "CINTAA may issue a notice but ultimately they will consider all the evidences and take the decision," said the actor's lawyer, ANI reports.

Actress Navneet Nishan, who played the central role on Ms Nanda's TV show Tara, confirmed in a statement that she had been harassed for four years by Alok Nath. Actor Deven Bhojani, who also worked on Tara but after Mr Nath's exit, told Zoom TV that Mr Nath 'gets crazy' when he's drunk.

After Vinta Nanda's Facebook post, actress Sandhya Mridul recounted her own experience shooting with Alok Nath, accusing him of lunging at her in a hotel room, screaming "you are mine" at her, attempting to force his way into her room and then calling her phone incessantly. She also accuses him off telling industry insiders she was difficult to work with.

In truth & solidarity.
I'm with you @vintananda#metoopic.twitter.com/ZoiT2dT3yL

A woman, speaking anonymously to mid-day, has also revealed that Alok Nath stripped in front of her on the set of Hum Saath Saath Hain - one of the many family dramas in which he was cast as his stock character, the 'sanskaari bapuji' - and that she was too terrified to complain to director Sooraj Barjatya.

The allegations by Ms Mridul and the woman crew member were casually dismissed by Alok Nath's lawyer as, "It normally happens," ANI reports.

On Tuesday, speaking to the press, Vinta Nanda said about Alok Nath: "I would imagine he's afraid and he is the one who needs to deal with his fear." Read her Facebook post here:

The #MeToo wave has taken the film industry by storm after actress Tanushree Dutta revived a decade-old controversy with sexual harrasment allegations against Nana Patekar two weeks ago. Other Bollywood celebrities who have been named in #MeToo accounts include filmmaker Vikas Bahl, actors Nana Patekar and Rajat Kapoor, singer Kailash Kher and poet-lyricist Vairamuthu, among others.