Lucknow Central is set against the backdrop of a jail and features Farhan Akhtar as a prisoner while in Simran, Kangana Ranaut features as a happy-go-lucky woman 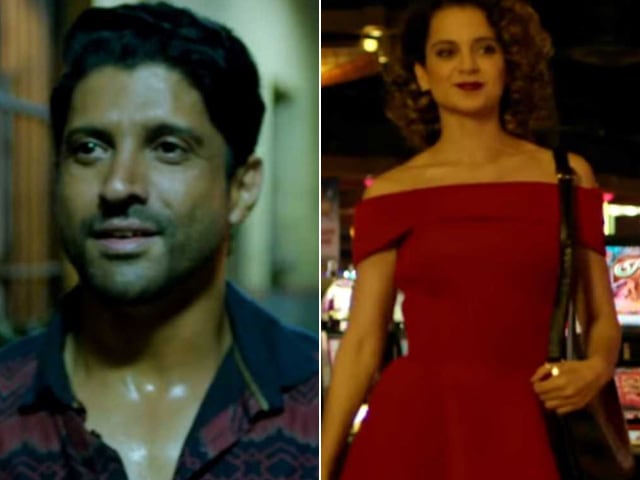 New Delhi: Bollywood is all set to offer two genres - a jail drama and a comedy this Friday. First up is Kangana Ranaut's Simran. Though, Kangana promoted the film in high spirits, as some have noted, it still got side-lined because of Kangana's explosive interviews, in the past few days. In Simran, Kangana Ranaut will be seen portraying the role of Praful Patel, a Gujarati chokri, who lives in New York and is a divorcee. Kangana is seen as a confident and happy-go-lucky woman in the film, who is also a shoplifter and is addicted to gambling. Watch the trailer of Simran here:


The film has been directed by Hansal Mehta and co-produced by Bhushan Kumar, Krishan Kumar and Shailesh R Singh.

The song of the film titled Single Rehne De, received a great response, which has a Gujarati rap in it.

If you haven't watched the song yet, here it is:


The other big release on Friday is Lucknow Central, directed by Ranjit Tiwari and starring Farhan Akhtar in the lead role. The movie is Farhan's much-awaited film, which is set against the backdrop of a jail and features him as a prisoner, who forms a music band along with some other inmates. The film is inspired by the story of convicts sentenced to life imprisonment. Of Lucknow Central, Farhan Akhtar earlier told IANS: "When I heard the story, I was amazed by it. The fact that these guys go out and perform, have a proper booking counter now, blew me away. They leave the jail, go out and perform and come back. It is amazing."


The film also stars Gippy Grewal and Deepak Dobriyal in pivotal roles. Bollywood stars, who were present at a special screening of Lucknow Central, have loved and appreciated the film on Twitter. Take a look at what celebrities think about Farhan's Lucknow Central:

Watched #LucknowCentral !!Love the film for its unusual concept that keeps u entertained with great performances!love love the climax!

#LucknowCentral is a great mix of music,fun &thrill. Fav scene is when @FarOutAkhtar walks in with the Bachchan film playing and the climax

Promoted
Listen to the latest songs, only on JioSaavn.com
After these tweets and the exciting story of Lucknow Central, we can't wait to watch the film. Are you ready?

So which film are you going to watch today - Farhan Akhtar's jail escape or Kangana Ranaut's comedy drama?