To Neetu Kapoor On Her Birthday, With Love From Ranbir And Riddhima 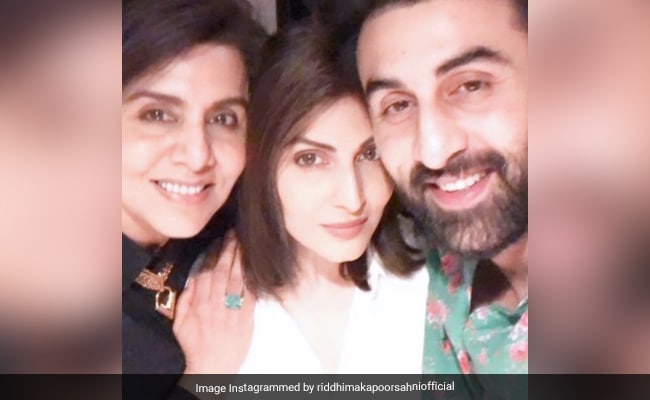 As Neetu Kapoor celebrates her 62nd birthday, the actress' daughter Riddhima Kapoor Sahni wished her in the best way possible by sharing a gem of a photograph. The happy picture posted by Riddhima also features her brother and Bollywood star Ranbir Kapoor. In the picture, the trio can be seen smiling with all their hearts. Riddhima's caption on the post was as adorable as the picture. In her post, she described Neetu Kapoor as "Iron lady." She wrote, "Happiest birthday my Iron lady. I love you so much Ma," adding a heart emoticon.

On Neetu Kapoor's birthday eve, Riddhima posted a selfie from with the veteran actress and she wrote: "Mom's birthday eve dinner. #dinnerready." Check out the picture here:

A post shared by Riddhima Kapoor Sahni (RKS) (@riddhimakapoorsahniofficial) on Jul 7, 2020 at 7:10am PDT

Riddhima, who has been staying with her family in Mumbai for a few months, recently gifted Neetu Kapoor a pup named Doodle. Neetu Kapoor introduced Doodle in her Instagram post and wrote: "Can't thank Riddhima enough for this cute button Doodle."

Neetu Kapoor is frequently seen sharing priceless memories with her late husband and veteran actor Rishi Kapoor on social media. Rishi Kapoor died at the age of 67 in a Mumbai hospital in April. He was diagnosed with cancer two years ago and flew to New York for treatment. He returned to Mumbai last September after having spent nearly a year in the US.

Big or small We all have a battle to fight in our heads you may have a huge house with all the luxuries and still be unhappy whereas have nothing n be the happiest it's all a state of mind !! All one needs is a strong mind n hope for a better tmrw !!! Live with gratitude ,hope ,work hard !!!! Value your loved ones as thats your biggest wealth

"Wish me luck as you wave me goodbye Cheerio, here I go on my way With a cheer, not a tear, in your eye Give me a smile, I can keep for a while In my heart while I'm away

Riddhima Kapoor, who is the granddaughter of Raj Kapoor, did not opt for a career in films like many of her family members. Riddhima is a jewellery designer and she runs a clothing line for children - Sam And Friends - named after her daughter Samara.