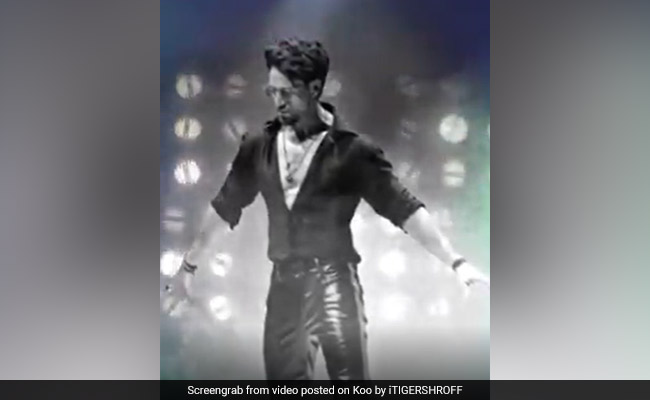 Tiger Shroff never fails to surprise us with his dance moves and high-octane stunts. He has become a national heartthrob and there's enough reason for it. With his range of skills and good looks, who wouldn't fall for him? Now, Tiger Shroff has added another feather to his cap. And, he calls his new venture "one of the most challenging things" that he has attempted to do. Curious to know what is the buzz about? We'll soon hear Tiger Shroff's voice in his first Punjabi/English single Poori Gal Baat.

Making his debut as a singer, Tiger Shroff has stolen the spotlight. He has released a snippet from the track on social media too. The caption read, "Definitely one of the most challenging things I have attempted. Can't say a word of it but tried singing my first Punjabi/ English single Poori Gal Baat. Coming soon." The post, shared on the Koo app, features a still image of Tiger Shroff with animation in the backdrop. We can hear a tune much like electronic dance music. Here is his post:

Tiger Shroff has a bag of talents to flaunt. One of his talents that we all love to talk about is his dancing skills. Oh boy, we can't get enough of his videos. Take a look at him nailing the moves effortlessly. When Tiger Shroff is on the dance floor, he can make anyone run for their money. Here's one of his dance videos:

We all are awed by Tiger Shroff's countless dedicated hours of training at the gym. The actor is known for nailing difficult stunts all by himself. He prides himself on his successful action stunts that get captured on camera. As the teaser for his next film Bade Miyan Chote Miyan got released, he shared the clip on social media and wrote, "It's the best feeling in the world to land right on the mark…Especially after you can't see anything in the dark and strike a pose like you meant to do that…Ane of those lucky shots. Thank you for all the love on our teaser."

Koo App
Its the best feeling in the world to land right on the mark…especially after you cant see anything in the dArk and strike a pose like you meant to do that…one of those lucky shots???? thank you for all the love on our teaser❤️???? #bademiyanchotemiyan
View attached media content
- Tiger Shroff (@iTIGERSHROFF) 10 Feb 2022

Tiger Shroff will also be seen in Heropanti 2 and Ganapath.