Tiger Shroff shared the video along with a cheeky caption 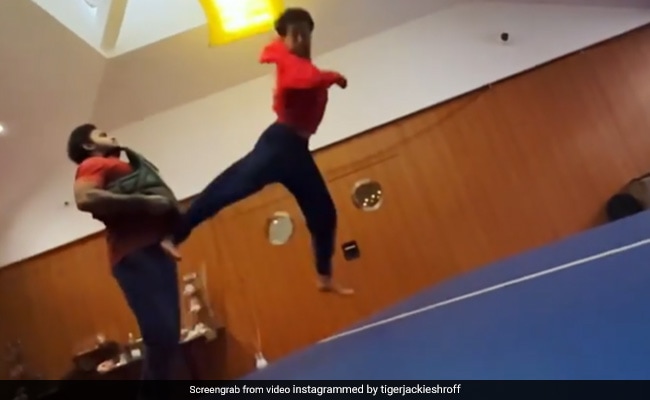 Tiger Shroff in a still from his video. (Image courtesy: Instagram)

We all know that Tiger Shroff is one of the fittest stars in Bollywood today. This is also evident in his films and music videos. From sleek action scenes to cool dance sequences, the actor does it all with the ease of an expert. It is no surprise that Tiger Shroff has a strict workout routine, glimpses of which he often shares with his fans on social media. And, while Tiger Shroff's Instafam is no stranger to his cool moves in the gym, the actor on Wednesday shared a video about what happens when “action rehearsals go wrong”.

In the video, Tiger Shroff is seen spinning in the air and kicking his instructor. However, he lands a fourth kick on his instructor's lower stomach in an area that is not covered by the protective vest. Sharing the clip, Tiger Shroff wrote, “When action rehearsals go wrong. Sorry bro, Nadeem Akhtar,” tagging his Parkour instructor.

Before this, Tiger Shroff had also shared another video from the gym where he is seen running on the treadmill. The clip features the Bruno Mars song Smokin Out The Window in the background. Referring to it, the actor said, “Who else is obsessed with this song?” In the hashtags, Tiger Shroff mentioned that he was prepping for the climax shoot of his upcoming film Ganapath.

In another video recently, the actor casually showed off his well-toned abs as he grooved to Unbelievable, a romantic track that has been sung by Tiger Shroff himself. Sharing the video, the Heropanti star wrote, “Hope you are having an unbelievable week. Stay healthy.”

Tiger Shroff made his Bollywood debut with the film Heropanti, alongside Kriti Sanon. He is known for his work in films such as Baaghi, A Flying Jatt, Munna Michael and War.