Here's How Hard Tiger Shroff Is Training For Heropanti 2

Tiger Shroff made his debut in Bollywood with Heropanti 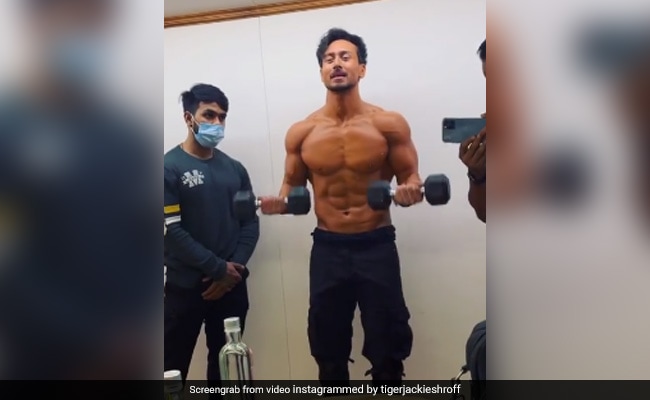 Tiger Shroff in a still from the video.(Image courtesy: tigerjackieshroff)

Actor Tiger Shroff, who is all set to star in the sequel of his debut Bollywood film Heropanti, on Thursday, gave us a glimpse of his preparations for the movie. Looks like the actor is training very hard to improve his physique for the film. He dropped a video that features him working out. He can be seen performing biceps curl exercise with a set of dumbbells. In the video, Tiger Shroff can be seen working out shirtless, showing off his perfectly toned abs and upper body. Sharing the video on Instagram, Tiger revealed that he is pumping up for Heropanti 2. "Getting action ready after a while...#heropanti2," he wrote in the caption of the post.

The 31-year-old actor's post received scores of comments from his fans and fellow celebrities. Among others, Tiger's father, actor Jackie Shroff, commented on the post and wrote: "Bless ya boy." Tiger's sister Krishna Shroff also commented on the post and heaped praises on his brother. "You got that 24/7 armour on 365 days a year," she wrote in one of her comments, while the other one read: "Real life superhero."

Earlier this week, Tiger shared a bunch of pictures of himself from the calendar shoot of photographer Dabboo Ratnani. The greyscale pictures feature Tiger in a stunning partly unbuttoned black shirt. He can be seen posing on his knees. The showstealer of the pictures have to be Tiger's well-defined abs. "Exclusive outtake from the Dabboo Ratnani calendar," Tiger wrote in the caption of the post.

As mentioned above, Tiger Shroff made his Bollywood debut with the film Heropanti, co-starring Kriti Sanon. He later appeared in several films like Baaghi, A Flying Jatt, And Munna Michael. He was last seen in 2020 film War.