Bade Miyan Chote Miyan: The film is going to be full of high-octane action 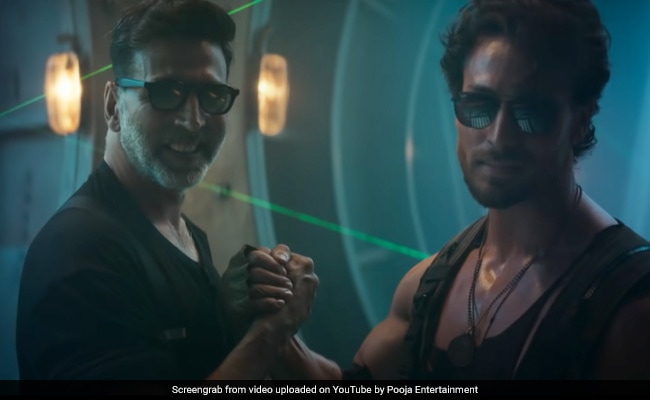 Akshay and Tiger in a still from the video. (courtesy: YouTube)

Akshay Kumar and Tiger Shroff in a film together. Enough said. The actors, who are known for starring in high-octane action films will soon share screen space in a film titled Bade Miyan Chote Miyan, which will be directed by Ali Abbas Zafar and it will be backed by Pooja Entertainment. The film is remake of 1998 comedy film of the same name, which featured Amitabh Bachchan and Govinda in double roles. The original was directed by David Dhawan and also featured Ramya Krishnan, Raveena Tandon, Anupam Kher and Paresh Rawal in pivotal roles. The film was one of the biggest hits of the year and the songs from the films trended big time too, especially Makhna, featuring Madhuri Dixit.

The film will release in Hindi, Tamil, Telugu, Malayalam and Kannada on theatres on Christmas 2023. Announcing his association with the project, Akshay Kumar wrote: "The year you debuted in this world, I debuted in films. Phir bhi muqabla karoge Chote Miyan? Chal phir ho jaye full-on action." Akshay Kumar stepped into films with 1987 Mahesh Bhatt-directed Aaj. However, his first big role as the lead actor was in Saugandh (1991).

Speaking of remake, the film's producer Vashu Bhagnani said, "It's a film very close to my heart as it brought together two legends Amit ji and Govinda and was directed by my favourite David ji. It is heartening to see my ChoteMiyan Jackky recreate that magic along with Ali Abbas Zafar who has a brilliant vision for the film. I am so humbled to have Akshay Kumar and Tiger Shroff be our Bade Miyan and Chote Miyan for a new generation of audiences in 2023," PTI quoted Vashu Bhagnani as saying.

Akshay Kumar has a super busy schedule. He will soon star in Bachchan Pandey. He will also feature in Prithviraj, which is a biopic of Prithviraj Chauhan. The actor has two more projects - Raksha Bandhan and Ram Setu. Last year, Akshay Kumar had 3 film releases, Bell Bottom with Kara Dutta, Vaani Kapoor and Huma Qureshi, Sooryavanshi with Katrina Kaif and Atrangi Re with Sara Ali Khan and Dhanush.

Tiger Shroff was last seen in Baaghi 3, co-starring Shraddha Kapoor. The actor is best-known for starring in films like War, Heropanti, The Flying Jatt, the Baaghi series and Student Of The Year 2. The actor has an impressive line-up of films this year. His upcoming projects are Heropanti 2, Baaghi 4 and Ganapath.The actor made his debut as a singer in 2020.