This Workout Video Of Milind Soman And His Mom, 81, Is Giving Us Major Fitness Goals

"Skipping with Usha Soman! Not a new activity for her but new for me," wrote Milind Soman 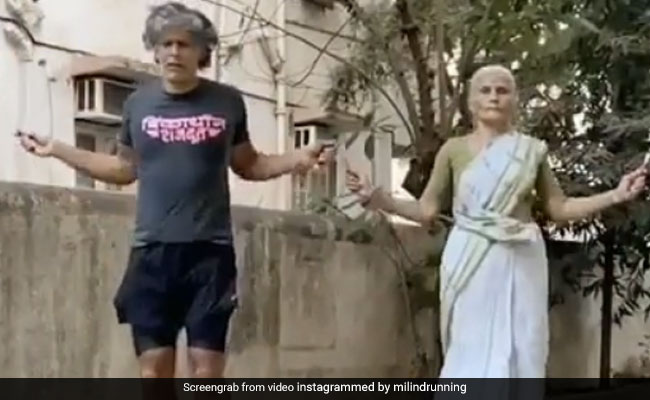 Now we know the secret behind Milind Soman's energy. You will know what we are saying once you check out his latest social media post. The model-actor posted a new workout video but this time, it also features his mother Usha Soman. In the clip, the mother-son duo can be seen skipping ropes on their terrace. Watching the actor's 81-year-old mother skipping rope like a pro gave us major fitness goals. Sharing the video and a close-up picture of himself and his mother, Milind Soman wrote: "Skipping with Usha Soman! Not a new activity for her but new for me. When you are at home 24x7, each one, teach one another! You are old only when you think you are."

Skipping with @somanusha ! Not a new activity for her but new for me when you are at home 24x7, each one, teach one another ! You are old only when you think you are.. #LockdownMantra #keepmoving #NeverStop #nevergiveup #love

This isn't the first time Milind Soman has shared a workout video of his mother. Earlier, he posted a clip of his mom and wife Ankita Konwar doing one-legged box jumps on their terrace. "28 and 81! Be fit at every age," he wrote in the caption and accompanied it with this super cool hashtag - #mygirls.

On the work front, Milind Soman was last seen in the second season of web-series Four More Shots Please!. He is best-known for the music video Made In India. He has also starred in films such as 16 December, Rules: Pyaar Ka Superhit Formula, Say Salaam India and Bajirao Mastani. He has also co-judged two television shows - India's Next Top Model and Supermodel Of The Year.