Monday Blues? Learn How To Begin The Week From Neena Gupta 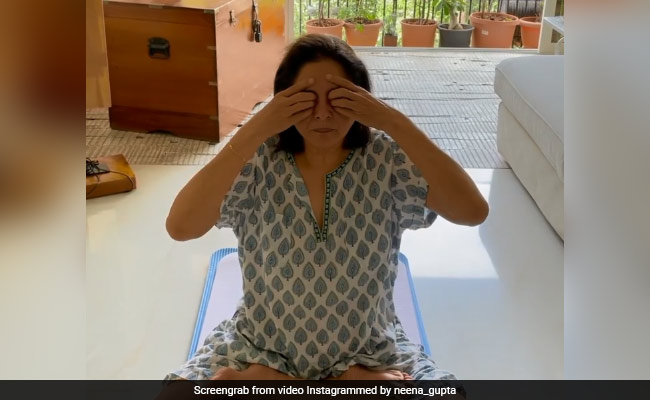 Neena Gupta in a still from the video. (Image courtesy: neena_gupta)

Neena Gupta can do it all.  With acting, directing and now writing, Neena Gupta is a trailblazer in more ways than one. The veteran actress has been defying societal norms with quiet dignity for decades now, all while looking like an absolute vision. And we may have discovered the secret to her age-defying looks and vivacious personality thanks to a video that the 62-year-old shared on Instagram. As the rest of us are struggling to shoo away the proverbial Monday blues, Neena Gupta has kicked off her week with a healthy dose of Yoga and meditation.

In a video that the actress shared, she can be seen practising Yoga at home. Sitting in the Padmasan or lotus position, she is seen cupping her eyes with her hands. The caption with the soothing video reads, "Hari Om Tatsat," which is also the Sanskrit shloka that is being recited in the background. Dressed in a lovely Indian print nightshirt and shorts, the actress looks at peace in her room, which also features a love terrace garden with potted plants. Also, do not miss the lovely wooden chest behind Neena that looks like it belongs in a palace.

Fans of the actress appreciated the video with emojis and positive responses. One user wrote, "You are an inspiration, ma'am."

Giving us a glimpse of just how much fun she has while performing Yoga, she also previously shared a video of herself practising a more complex pose, Dhanurasan. In it, she is seen pulling off the pose, albeit with some sound effects. Laughing at herself for making funny breathing noises while performing the pose, she wrote, " Dhanurasan with too much noise." Watch the video here:

The actress who turned author with her autobiography Sach Kahun Toh has been taking her fans down memory lane with some lovely throwback pictures and anecdotes. Most recently, the actress shared a throwback picture of herself with director Shekhar Kapur. The photo is a still from the television show Khandaan. Sharing the video, Neena wrote, "Uff memories .....With Shekhar Kapur in Khandaan series in 1985." Fans loved the stunning picture and thanked the actress for sharing the photo.

Neena Gupta was last seen in the film Sardar Ka Grandson along with Arjun Kapoor and Rakul Preet Singh. Her upcoming releases include projects such as the Kapil Dev biopic 83, Dial 100 and Goodbye. She will also be seen in the second season of the web series Masaba Masaba, which stars her daughter, designer-actress Masaba Gupta in the titular role.