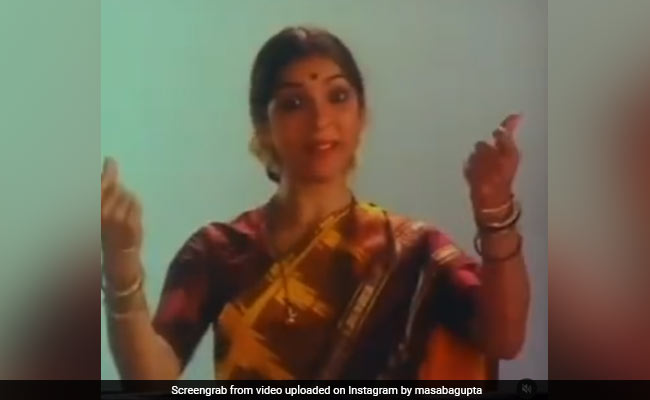 Neena Gupta in a still from the video. (courtesy masabagupta)

Neena Gupta recently launched her memoir Sach Kahun Toh, in which she wrote about the different facets of her life. This, however, is the story of an old television commercial she did for a pressure cooker brand. The video was shared by Neena Gupta's daughter and fashion designer Masaba Gupta. Sharing the video on Instagram, she wrote: "The text time I come to eat lunch I expect this exact performance." Neena Gupta replied "Hey Bhagwan" in the comments. Soni Razdan, a close friend of Neena Gupta and her Mandi co-star wrote: "Hahaha Masaba how did you get hold of this?" Mini Mathur commented: "I remember asking mom to make tomato soup and matar pulao every time after seeing this ad. Neena Gupta made this brand iconic."

Without much ado, take a look at the video shared by Masaba Gupta:

During the lockdown, Neena Gupta moved to her house in Mukteshwar, Uttarakhand. She has actively been sharing posts from her life there. Take a look:

She also starred in Amazon Prime Video's web-series Panchayat and Netflix's Masaba Masaba, in which she featured along with her daughter and designer Masaba Gupta. She was last seen in Sardar Ka Grandson, featuring Arjun Kapoor, Rakul Preet Singh, Aditi Rao Hydari and John Abraham. The film is streaming on Netflix.