This Is How Much Fun Priyanka Chopra, Farhan Akhtar And Shonali Bose Had On The Sets Of The Sky Is Pink

This BTS picture is all about "fun times," the way Farhan Akhtar described it 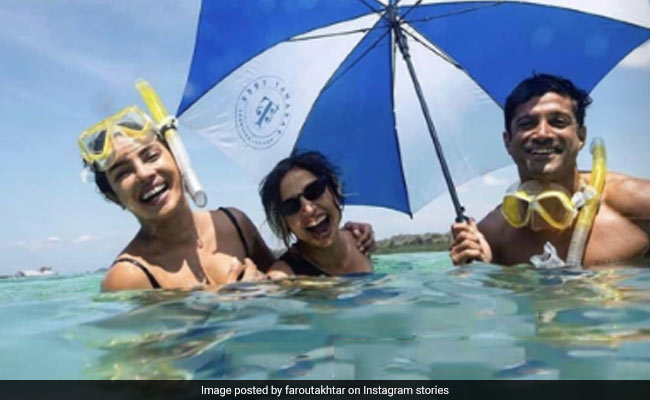 It's never a dull day on the sets of The Sky Is Pink and Farhan Akhtar's latest Instagram story reminds us of just that. The actor posted a behind-the-scene picture of himself along with his The Sky Is Pink co-star Priyanka Chopra and the film's director Shonali Bose. In the picture, the trio could be seen chilling together in the water and they could be seen smiling with all their hearts. Farhan Akhtar put everything into perspective, when he captioned the post: "Fun Times." He accompanied the post with the hashtags #BTS and #TheSkyIsPink. The picture was later curated by several fan clubs dedicated to the actors.

On Tuesday, the makers of the film released the song Pink Gulaabi Sky on social media, which went insanely viral. Sharing the song on social media, Farhan Akhtar wrote: "A family that dances together, slays together." ICYMI, here's the song:

The Sky Is Pink is based on the life of late motivational speaker and author Aisha Chaudhary (played by Zaira Wasim in the film), who was diagnosed with a terminal illness. Priyanka and Farhan Akhtar play Aisha's onscreen parents Aditi and Niren in the movie. The Sky Is Pink has been co-produced by Priyanka Chopra, Siddharth Roy Kapur and Ronnie Screwvala. The film also features Rohit Saraf and it is slated to release on October 11. The Sky Is Pink premiered at the Toronto Film Festival in September this year.