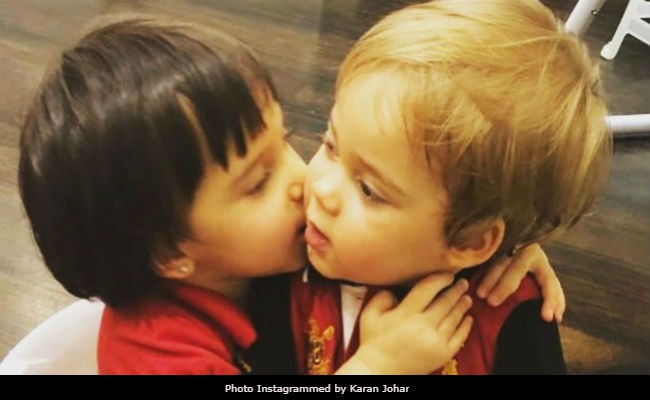 Director-producer Karan Johar surely made his Instafam very happy by sharing a million dollar photo of his cute little munchkins- Yash and Roohi. "Sibling love! Roohi Yash," Karan captioned the photo. In the recent photo shared by Karan on Instagram, Roohi and Yash appear to be in a playful mood. Roohi can be seen embracing his twin brother Yash and planting a kiss on his cheek. Every time Karan shares a photo of his twins, the Internet has a meltdown of sorts. The comments section is flooded with words like: "Two lovely kids much more than adorable. Love you dear," "Million dollar picture," "They are damn cute. Lots of love n blessings." Twinkle Khanna and Malaika Arora also left their precious comments on the photo. Take a look at the photo here:

Karan Johar had earlier shared a video of his twins enjoying their play date with Kareena Kapoor's son Taimur.

Earlier, we chanced up on a photograph of Dhadak co-stars Janhvi Kapoor and Ishaan Khatter with Karan Johar's twins. The collage featured Yash in Janhvi's arms while Roohi seemed to be having a nice time with Ishaan. The adorable photo was shared widely on social media by Janhvi's fan clubs.

We also witnessed a cute photo of Yash with Varun Dhawan, who made his Bollywood debut with Karan's film Student Of The Year.

Yash and Roohi were born last year via surrogacy. Karan Johar, a single parent, last year told news agency IANS that he is not going to be "hysterical" and "hyper parent." "I am playing both mother and father in this dynamic, so I have a double role to play and for me, it's even more daunting. I have told myself that I am not going to be a hysterical, hyper parent because I see so many of them around me and specially leading actresses who become mothers," IANS quoted Karan Johar as saying.