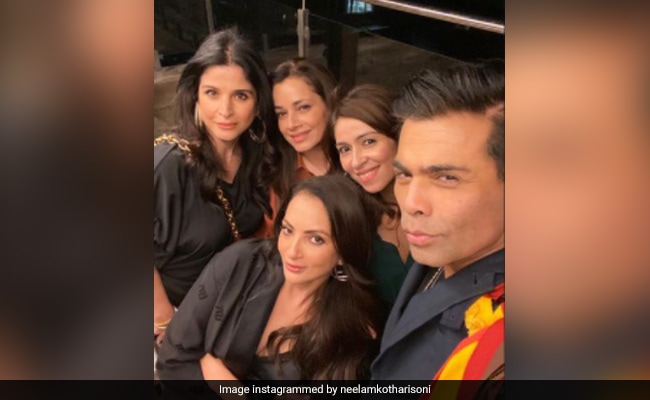 First, happy birthday, Karan Johar. The filmmaker turned 49 today and birthday wishes are pouring in for him from every corner. Seema Khan, Neelam Kothari, Maheep Kapoor and Bhavana Pandey, who were the lead stars in Karan Johar's Netflix series Fabulous Lives Of Bollywood Wives , wished their friend on his birthday, on social media. Seema Khan, who is the wife of actor-producer Sohail Khan, shared a bunch of throwback pictures of herself and Karan Johar to wish him on his birthday. While one picture features only Seema and Karan, other two also feature Maheep Kapoor with them. Sharing the pictures on Instagram, she wrote: "#karanappreciationpost Happy birthday K, you're special and you know it #neveradullmomentaroundhim #heartofgold #stillmanagestointimidateme #loveyou."

Neelam Kothari, who is a jewelry designer by profession, and is the wife of actor Samir Soni, shared a recent picture of herself and the rest of the cast of Fabulous Lives of Bollywood Wives and Karan Johar. She shared the picture on her Instagram story and wrote: "Happiest birthday Karan Johar."

Bhavana Pandey, who is the wife of actor Chunky Pandey, shared two pictures of herself and the birthday boy on her Instagram story. While one picture features her with Karan, other one also features Malaika Arora and some other friends of the celebrities. "Happy birthday Karan. Love ya," Bhavana Pandey wrote along with one of the pictures.

Sanjay Kapoor and Maheep Kapoor's daughter Shanaya Kapoor also dedicated an Instagram post to Karan Johar's birthday. Shanaya shared a picture of herself, her parents and Karan Johar, on Instagram. "Happy birthday Karan, we love you! #fam #throwback," she wrote in the caption of the post.

In terms of work, Karan Johar is currently working on his upcoming period-drama Takht . The film will star Kareena Kapoor, Ranveer Singh, Alia Bhatt, Anil Kapoor, and Vicky Kaushal among other celebrities.