The Sky Is Pink is the love story of Aditi (Priyanka Chopra) and Niren (Farhan Akhtar), as told by their daughter Aisha (Zaira Wasim). 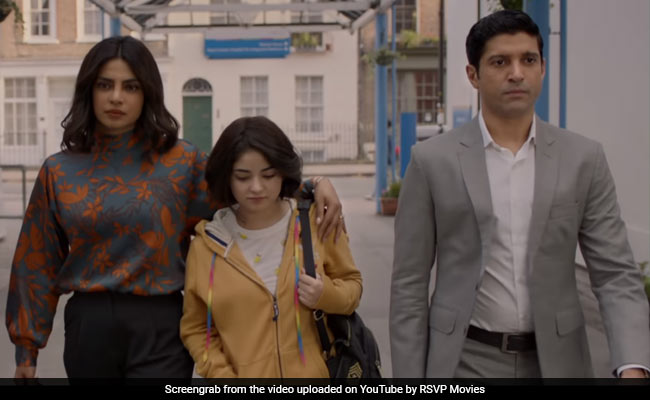 A still from The Sky Is Pink. (Image courtesy: YouTube)

The much-awaited trailer of The Sky Is Pink is out and it will make you smile and cry at the same time. The Shonali Bose-directed film features Priyanka Chopra and Farhan Akhtar in lead roles while Zaira Wasim, the narrator of the film, plays their onscreen daughter Aisha, who is dying because of Busulfan Lung Damage. For Aisha, her parents' (whom she loving calls Panda and Moose) love story is like no other and her all-time favourite. But she describes herself as the 'villain' in their love story. Aditi (Priyanka Chopra) and Niren (Farhan) are truly madly deeply in love and they are living happily with their two children until Aisha is diagnosed with the deadly disease. They fall apart and reunite many times during the testing times and that forms the plot of The Sky Is Pink.

Watch the trailer of The Sky Is Pink:

The Sky Is Pink is all set to premiere worldwide at the Toronto International Film Festival on September 13 while the film will open in Indian cinemas on October 11. Priyanka Chopra is currently in Toronto awaiting her team for the premiere.

Priyanka Chopra, who is married to singer Nick Jonas, shifted to the US after she got the lead role in American television series Quantico in 2015. She has also featured in a string of Hollywood films including Baywatch, Isn't It Romantic? and A Kid Like Jake.

Meanwhile, The Sky Is Pink is also actress Zaira Wasim's farewell film as the National Award-winning actress announced her retirement from films in July this year. Zaira debuted in Bollywood with Dangal and she also featured in Secret Superstar.