To Zaira Wasim From Bollywood: What Her Colleagues Have Said So Far

We haven't heard from those we would have liked - Aamir, Zaira's mentor of sorts; Priyanka and Farhan, Zaira's co-stars of The Sky Is Pink 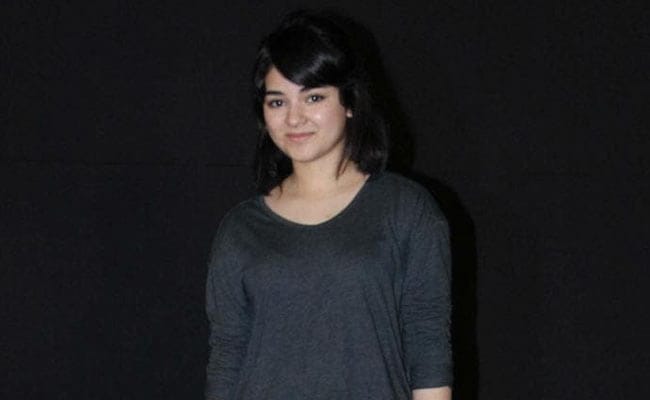 Former actress Zaira Wasim's polarising post on her decision to quit acting has prompted responses from several in the film industry. Unsurprisingly, we haven't heard from those we would have liked - Aamir Khan, for instance, a man of few tweets, has not offered an opinion even though he has been a mentor of sorts to Zaira, casting her in Dangal and then in Secret Superstar; neither have Priyanka Chopra and Farhan Akhtar, Zaira's co-stars in her third and final film The Sky Is Pink, have had nothing to say either. Several others have.

Actress Raveena Tandon was an early critic of 18-year-old Zaira Wasim's announcement last weekend that she was opting out of Bollywood because it interfered with her 'imaan' and 'relationship with Allah.' Raveena posted a tweet in which she said she wished 'ungrateful two-film-olds' would 'exit gracefully' and 'keep their regressive views to themselves.' Raveena has now deleted the tweet, deeming it 'harsh' after a national channel suggested that Zaira Wasim had been under pressure to quit Bollywood. Here, we should mention that the video produced as evidence of this is believed to be a few years old and, as such, unlikely to have triggered Zaira Wasim's decision to end a short but extremely rewarding acting career.

In place of her previous tweets, Raveena Tandon posted these:

If this is true and the reason for her to quit,if she was or is under pressure, then I do feel sad for the girl.Was she forced into writing the long statement by radicals out of fear?She was a role model to so many youngsters with dreams and inspirations that they could achieve. https://t.co/Ym4aih4PBC

I wish her luck and strengthAfter seeing this,I now regret my first immediate tweet after reading her statement.Maybe she was forced to write what was unacceptable to people like me who love films,cinema,the industry, that I was born into.Deleting the tweet that now sounds harsh. https://t.co/Okcg3NrCFa

South star Siddharth, who is vocal on a spectrum of issues, tweeted in response to Zaira Wasim's post: "It's your life... I believe our art and our profession is our life. We fight to keep religion out of it... If your religion made you do this, maybe you didn't belong here after all. Godspeed"

It's your life. Do whatever you want. Wish you only the best for your future. I believe our art and our profession is our life. We fight to keep religion out of it. It doesn't belong here. If your religion made you do this, maybe you didn't belong here after all. "Godspeed". https://t.co/niXdrxL6qk

Actress Nafisa Ali, who was 20 when she filmed her debut in 1978 classic Junoon, was sympathetic. "I saw myself when I was 20 and I just felt for young actor Zaira Wasim... work is something which is your choice, it is your freedom, your independent right."

This is the new me ... older , grey and feeling positive . "I saw myself when I was 20 and I just felt for young actor Zaira Wasim . I thought let me put this message out that work is something which is your choice, it is your freedom, your independent right. There are many pressures young people are surrounded by... but if you have a choice, make you sure you think and make the right choice." "Because I always look back and say why did I give in, why did I listen to my father, I should have listened to myself ".

Perhaps the best and most empathetic response so far has been from actress Soni Razdan. In separate tweets, she wrote, "I just hope she grows up to realise that if you love what you do, that is exactly what God would want for you" and "Zaira Wasim you are so young and you may feel differently in four years' time. We will welcome you back with open arms sweetheart if that is so."

Nitesh Tiwari, who directed Zaira Wasim in her National Award-winning role in Dangal, told mid-day after her announcement: "I read about it in this afternoon, and it came as a shock to me. This was unexpected, but at the end of the day, it is her life and she has the right to lead it the way she (deems fit)." mid-day also reports that Zaira will not promote her final film, The Sky Is Pink, which is expected to release in October.

Later, after rumours that her account had been hacked, Zaira shared another post confirming that the previous note had been written by her.

This to clarify that none of my social media accounts were or are hacked and are being handled by me personally. Kindly refrain from believing or sharing claims that state otherwise! Thanks.

Despite the acclaim she received for the two films she has already starred in - the National Award for Best Supporting Actress for Dangal and Filmfare Critics Award for Best Actress for Secret Superstar - life in the spotlight has been difficult for Zaira Wasim. Soon after Dangal made her a star, she posted and then deleted an apology after being savaged online for meeting and taking pictures with Mehbooba Mufti, then the chief minister of Jammu and Kashmir, to which state Zaira belongs. Aamir Khan and other stars rose to her defence. Last year, Zaira revealed that she had been diagnosed with depression and anxiety and struggled with suicidal thoughts.