Singer Neha Kakkar commented: "Look at her!" with a heart-eye icon 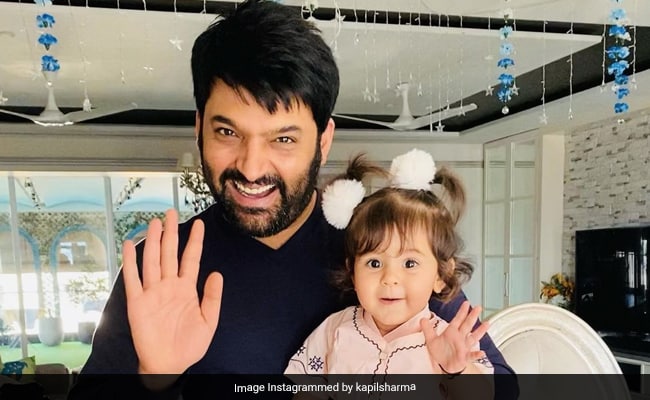 Having a dull day? Don't worry, we have a super cute picture of baby Anayra to cheer you up. Comedian-actor Kapil Sharma, on Friday, treated his fans to a beyond adorable photo of his daughter and the Internet loves it. Kapil and his wife Ginni Chatrath, who got married as per Hindu and Sikh traditions in December 2018, welcomed a baby boy earlier this month but more on that later. In his latest Instagram entry, Kapil Sharma and little Anayra can be seen smiling and waving while posing for the camera. The little munchkin looks cute like a button in a peach frock. Her ponytails stole the show.

Sharing the picture, Kapil Sharma wrote: "Good morning, everyone." His friends and colleagues from entertainment industry such as Neha Kakkar, Neeti Mohan, Aahana S Kumra, Bharti Singh, Mahhi Vij, Sumona Chakravarti and Amit Sadh were all hearts for the photo of Anayra. Singer Neha Kakkar commented: "Look at her!" with a heart-eye icon while comedian Bharti Singh wrote: "Meri bacchi!"

Kapil Sharma announced the birth of his baby boy on February 1. He took to Twitter to share the good news and wrote: "Namaskaar! We are blessed with a baby boy this early morning, by the grace of God. Baby and mother both are fine, thank you so much for all the love, blessings n prayers. Love you all - Ginni and Kapil."

Namaskaar we are blessed with a Baby boy this early morning, by the grace of God Baby n Mother both r fine, thank you so much for all the love, blessings n prayers love you all ginni n kapil #gratitude

Kapil has taken a short break from his comedy show The Kapil Sharma Show to spend time with his family currently.

Kapil and Ginni became parents to Anayra in December 2019. On her first birthday, the comedian shared this adorable post:

Kapil Sharma made his debut in the TV industry with The Great Indian Laughter Challenge Season 3 and went on to feature in Bollywood film Kis Kisko Pyaar Karoon.