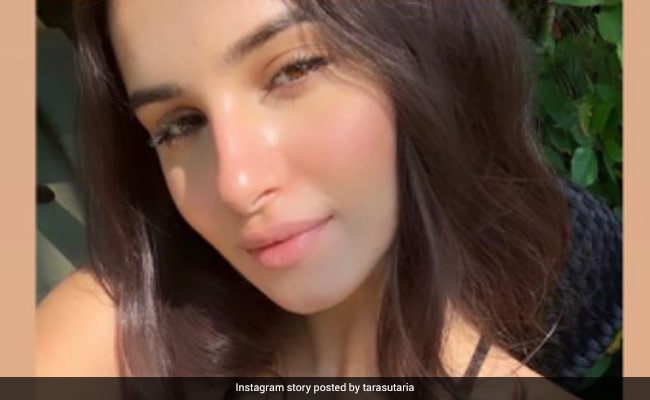 Tara Sutaria, who frequently treats everyone to glimpses of her vacation diaries on Instagram, has been reminiscing about Goa while staying at home. Her latest Instagram story says it all. On Tuesday, Tara posted an unseen throwback picture of herself from her Goa vacation on the platform. In the picture, the Student Of The Year 2 actress can be seen posing under the sun at presumably a resort. Tara is sporting a black strappy outfit in the sun-kissed picture. The 25-year-old actress also wrote a caption on her Instagram story. She wrote, "Throwback to sleepy mornings in Goa."

Tara Sutaria keeps dreaming about her Goa vacations on Instagram. Earlier in April, the Marjaavaan actress took us back to her childhood days on her Instagram story. She had posted a throwback picture of herself from her Goa vacation. The photo also featured Tara's twin sister Pia Sutaria. The Sutaria sisters look adorable in the frame as they hug each other. In the post, Tara wrote, "Lil(little) twinnies rocking our Goa tan forever."

Take a look at a few more pictures of her vacations here.

Meanwhile, Tara Sutaria, who is currently gearing up for the upcoming film Ek Villain Returns, flew to Goa to shoot for its second schedule in April. The actress returned to Mumbai the same month after she completed the shoot. Tara was spotted with her Ek Villain Returns co-star Arjun Kapoor at the Mumbai airport both times.

Ek Villain Returns will also feature John Abraham and Disha Patani in pivotal roles. The upcoming movie is the second installment of the Ek Villain franchise. Ek Villain was released in 2014. The movie featured Sidharth Malhotra and Shraddha Kapoor as leads. Riteish Deshmukh was cast as the antagonist in the 2014 film.

Tara Sutaria was last seen in film Marjaavaan in 2019. Apart from Ek Villain Returns, the actress also has movies like Tadap and Heropanti 2 coming up.