Swara Bhasker recently shared a few glimpses of herself from the sets of her upcoming film Jahaan Chaar Yaar on Instagram. 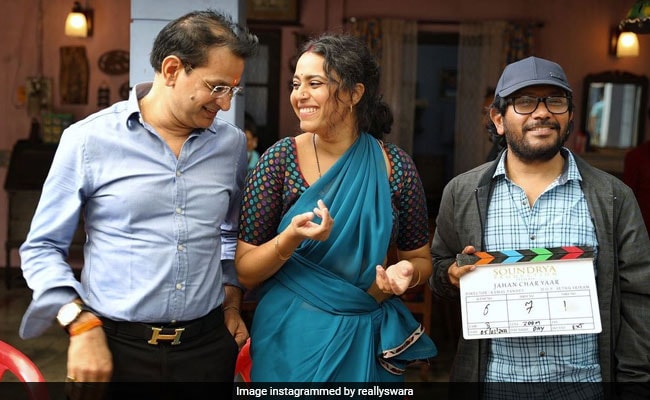 Swara Bhasker, who worked with producer Vinod Bachchan in Kangana Ranaut's 2011 film Tanu Weds Manu, is reuniting with him for her upcoming movie Jahaan Chaar Yaar. Swara recently started shooting for the project in Lucknow. The actress gave a sneak-peek of Day 1 from the sets of Jahaan Chaar Yaar on her Instagram handle. Swara posted a series of pictures, two of them featuring her and Vinod Bachchan along with Jahaan Chaar Yaar director Kamal Pandey. In her post, she expressed her excitement of shooting with the Tanu Weds Manu producer after 11 years and "coincidentally in the same city."

She wrote, "So happy to be working with @vinodbachchan Sir again after 11 years of shooting #TanuWedsManu. Co-incidentally in the same city! Started shooting for #JahaanChaarYaar in Lucknow today. Directed by @kamalpandey723 Presented by @soundrya.production (sic)."

Swara added that she "can't wait" for her co-stars Shikha Talsania, Meher Vij and Pooja Chopra to join the sets of Kamal Pandey's directorial venture Jahaan Chaar Yaar. "Here's a glimpse from the first day of the shoot. Can't wait for @shikhatalsania @mehervij786 @poojachopraofficial to join @jahaanchaaryaar shoot (sic)."

Swara announced her upcoming film Jahaan Chaar Yaar on social media, a few days ago. She posted a picture of herself along with her co-stars Shikha, Meher and Pooja on her Instagram handle. The actress wrote, "Wooohooooo! Excited to announce my next, #JahaanChaarYaar with Shikha Talsania, Meher Vij and Pooja Chopra. #GirlGang #cannotwait #announcement. Presented by Soundrya Productions, Directed by Kamal Pandey, Produced by Vinod Bachchan. Shoot begins from 5th of March, 2021...(sic)."