Swara Bhasker On Performing Stunts For The First Time, Playing A Cop And More

"I am doing action for the first time in my career and I'm quite nervous," said Swara Bhasker 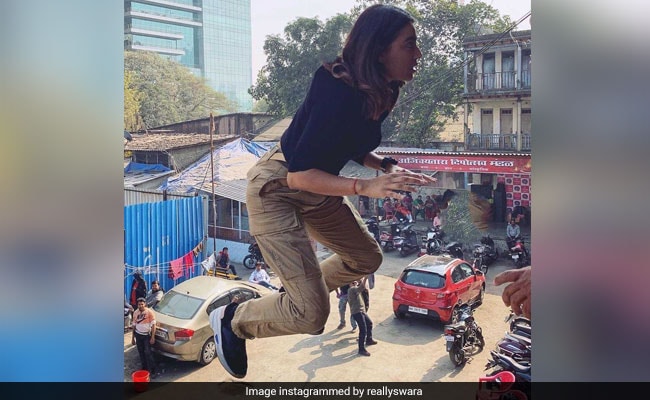 Swara Bhasker on the sets of Flesh. (Image courtesy: reallyswara)

Swara Bahasker, who will be seen playing the role of a cop in Eros Now's web-series Flesh, recently interacted with the media and shared her experience of performing stunts for the first time and said that she is "quite nervous," reports news agency IANS. During the media interaction, the 30-year-old actress revealed that she has done some basic training under action directors Habib-Rizwan and told IANS: "I am doing action for the first time in my career and I'm quite nervous. I have done some basic training with Habib-Rizwan. This process has made me realise how much effort stuntmen and women and fighters put into the thrilling sequences we love in our films and I think as audiences, we do not appreciate them enough."

Flesh touches upon the theme of the human trafficking industry and showcases the story of a police officer (played by Swara), who works towards destroying the human trafficking racket. Swara went through rigorous training in order to make her performance more convincing. She even shared a picture of herself from her preparatory session on her Instagram profile on Tuesday.

Swara shared her experience of playing the role of a police officer in the web-series and said that it has been a "real learning experience" for her. "It's exciting and obviously intimidating as well. Brave and honest police officers are the real heroes of our society and it has been a real learning experience to know about the challenges and limitations within which cops in India operate," IANS quoted Swara Bhasker as saying.

Flesh has been directed by Danish Aslam and it has been produced by Siddharth Anand. Apart from Swara Bhasker, the series also features Akshay Oberoi, Vidya Malvade, Kavin Dave and Yudhishtir Urs.

Swara Bhasker was last seen in the 2018 film Veere Di Wedding. She has featured in films such as Prem Ratan Dhan Payo, the Tanu Weds Manu series and Raanjhanaa among others. Swara has also starred in the web-series It's Not That Simple.