Swara Bhasker Recounts Sexual Harassment Incident By A Director. 'Took Years To Realise About It,' She Says

"I never realised it because, I escaped. Because the person did not touch me and I managed to ward it off," Swara Bhasker said 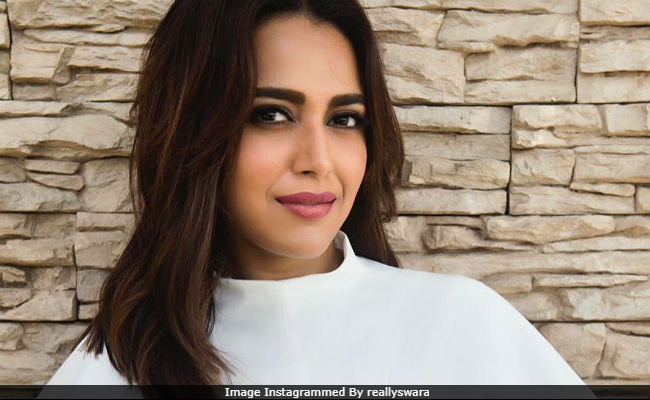 Actress Swara Bhasker on Friday said that she was 'sexually harassed by a director', but it took her years to realise what exactly had happened, reports news agency PTI. Swara hasn't named anyone, but added that the harassment happened at work and the director was being "predatory." "It took me six to eight years to realise when I heard someone else talk about their experience of harassment at a panel discussion like this. I was like God, what happened to me three years ago was actually sexual harassment at workplace! I never realised it because like you said, I escaped. Because the person did not touch me and I managed to ward it off," Swara said during the sidelines of an event, reports PTI.

"I would just tell myself that this director is being... whatever, but that is not the full truth. The director was not being an idiot or... he was being a predator," she added.

In 2017, Swara had first opened up about being harassed by a filmmaker during an outdoor shoot and had told Mumbai Mirror that "sexual harassment is a universal phenomenon because fundamentally it is about power or rather the misuse of power."

Recounting the horror of being stalked and harassed by the director, the Veere Di Wedding actress, who was "fairly new" in the industry at that point, told Mumbai Mirror, "He stalked me during the day and called me through the night. I was asked to go to his hotel room on the pretext of discussing the scene and would find him drinking. During the first week itself, he started talking about love and sex and one night, arrived in my room, drunk, and asked to be hugged. It was scary."

At the event, Swara also said that she wasn't able to recognise the pattern of harassment or the behaviour because "as part of our culture a girl child is not taught to recognise a predatory behaviour for what it is."

"There is so much of culture of silence, around sexuality in India, around the issue of sexual harassment, actually not just In India, everywhere around the world that we are just going through are lives without recognising it properly. We just recognise the discomfort," Swara said, PTI reports.

Several people from the industry, including actress Tanushree Dutta, have opened up about their #MeToo accounts, in which some of the top artistes have been named and shamed. Swara Bhasker was among the first celebrities to have voiced her support in favour of Tanushree Dutta.

"First of these things is completely inhospitable and hostile society and a culture that actively or sub-consciously enables predators... We should use this moment to not just talk about the one predator that got caught and got glamourised," Swara said

"But we should also talk about the culture that enables these predators to reach the position of power they do. So, it's also a question of making ourselves aware of many things that go into legitimising predatory behaviour," she added.