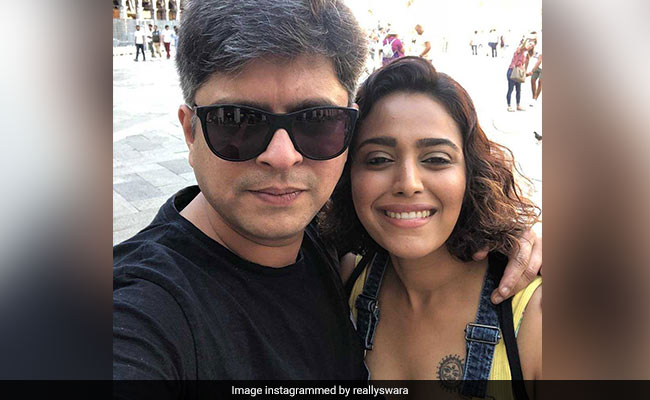 Actress Swara Bhasker topped trends on Thursday after reports that she had broken up with rumoured boyfriend screenwriter Himanshu Sharma. Swara and Himanshu reportedly started dating during the shooting of the 2011 film Tanu Weds Manu, in which Swara was cast in a supporting role and which Himanshu wrote. As of now, neither Swara nor Himanshu have officially announced a split. However, a source close to the couple claimed that "separation is amicable" and told  Indian Express: "Swara Bhasker and Himanshu Sharma have parted ways due to their disagreement about what the future should look like. The separation is amicable."

Last year, Swara Bhasker posted this picture of herself and Himanshu on a vacation in Italy that she described as 'forced' on Himanshu by his 'girlfriend.'

When your girlfriend forces a vacation on you and then makes you pose for selfies also! #TortureByHoliday with #HimanshuSharma

Swara also told news agency IANS, "No marriage plans. Himanshu and I joke that we are in a blissful and directionless relationship. More seriously, we are both fairly occupied for the next whole year, year and a half at least. So, really I don't think there's any time to plan a wedding."

Swara Bhasker and Himanshu Sharma have worked together on several projects that include Aanand L Rai's 2013 film Raanjhanaa, and the Tanu Weds Manu series. Himanshu Sharma is a National Award-winning film writer, who stepped into the industry with the 2007 film Strangers. He has also written scripts for TV shows such as Kkusum and Bhootwala.

On the work front, Swara Bhasker was last seen in Veere Di Wedding, co-starring Sonam Kapoor, Kareena Kapoor and Shikha Talsania. She hasn't announced her upcoming projects as of now. Himanshu Sharma's last project was Aanand L Rai's Zero. He has reportedly collaborated with the director on another film.

Swara Bhasker is best-known for her performances in films such as the Tanu Weds Manu series, Nil Battey Sannata, Raanjhanaa and Anaarkali Of Aarah among others. She has also featured in several web-series including It's Not That Simple, Rasbhari and Flesh.

Swara Bhasker stepped into the Indian film industry with the 2009 film Madholal Keep Walking. However, her break out film was Aanand L Rai's Tanu Weds Manu, in which she played the role of Kangana Ranaut's friend Payal.