Trending: Pic From Swara Bhasker's Vacation With Boyfriend Himanshu Sharma Which She 'Forced' On Him

Swara Bhasker captioned her post: ""When your girlfriend forces a vacation on you" 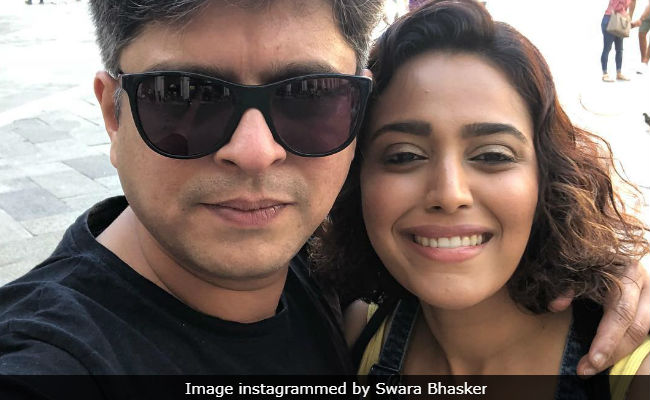 Swara Bhasker found a spot on Thursday's trends list after pictures from her last week's Italian vacation, featuring her boyfriend Himanshu Sharma (as per Swara she forced the vacation on him) went viral. In the last week, Swara shared maximum pictures chronicling her vacation with Himanshu on Instagram stories but she posted one picture as a post five-days-ago, which is now trending like crazy. Swara captioned the now viral selfie: "When your girlfriend forces a vacation on you and then makes you pose for selfies also! #TortureByHoliday with #HimanshuSharma." Himanshu Sharma is a National Award-winning writer and also a producer in Bollywood. Himanshu has been credited as writer for film like the Tanu Weds Manu series and Raanjhanaa (all featuring Swara) while he has produced Nil Battey Sannata (with Swara in lead role) and the Happy Bhag Jayegi series.

When your girlfriend forces a vacation on you and then makes you pose for selfies also! #TortureByHoliday with #HimanshuSharma

Last year, Swara Bhasker dismissed reports of her impending wedding with Himanshu Sharma and told news agency IANS: "No marriage plans. Himanshu and I joke that we are in a blissful and directionless relationship. More seriously, we are both fairly occupied for the next whole year, year and a half at least. So, really I don't think there's any time to plan a wedding."

True to her word, Swara Bhasker was seen in critically acclaimed Anaarkali of Aarah and then in Veere Di Wedding after she gave the above statement. Shashanka Ghosh-directed Veere Di Wedding took a while to complete because it was postponed at least twice to accommodate Kareena Kapoor's dates, which were rescheduled due to her pregnancy.

Swara Bhasker hasn't announced her next project yet.