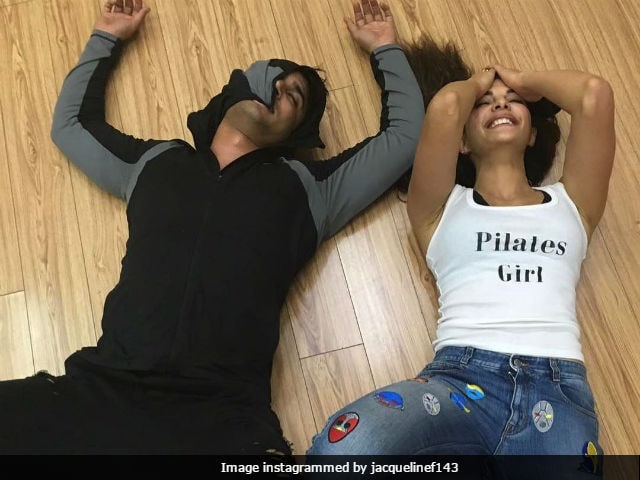 Sushant and Jacqueline will be seen together for the first time (Image courtesy: jacquelinef143)

New Delhi: Sushant Singh Rajput and Jacqueline Fernandez have begun filming for Karan Johar's Dharma Productions film Drive. Karan Johar posted a picture of the two actors on social media. The duo has their back towards the camera and the clapboard reads the film's name. The picture posted by the 44-year-old filmmaker has been captioned: "DRIVE Starts shoot today! The sexiness of @sushantsinghrajput and @jacquelinef143 #dharmaproductions @tarun_mansukhani(sic)." Tarun Mansukhani, who will be returning to filmmaking after a gap of seven years, also shared his excitement for the upcoming project on Twitter. He last directed the 2008 hit romantic comedy Dostana starring Priyanka Chopra, John Abraham and Abhishek Bachchan.

Promoted
Listen to the latest songs, only on JioSaavn.com
Sushant Singh Rajput, who started his acting career with popular television show Pavitra Rishta, made his Bollywood debut with the 2013 movie Kai Po Che! co-starring Rajkummar Rao and Amit Sadh. The 31-year-old actor was last seen in 2016 super hit film MS Dhoni: The Untold Story, directed by Neeraj Pandey. The Detective Byomkesh Bakshy! actor essayed the role of cricketer Mahendra Singh Dhoni in the film. He will next be seen in Paani, directed by Shekhar Kapur. The film also features Anushka Sharma and Ayesha Kapur in lead roles. The Shuddh Desi Romance actor will also be seen romancing Kriti Sanon in Dinesh Vijan's Raabta.

Meanwhile, Jacqueline Fernandez recently wrapped up shoot for Reload along with Sidharth Malhotra. The film is the prequel to 2014 movie Bang Bang and is scheduled to release on August 25. The other upcoming films of the 31-year-old actress are - Judwaa 2 co-starring Varun Dhawan and According to Mathew, directed by Chandran Rutnam.