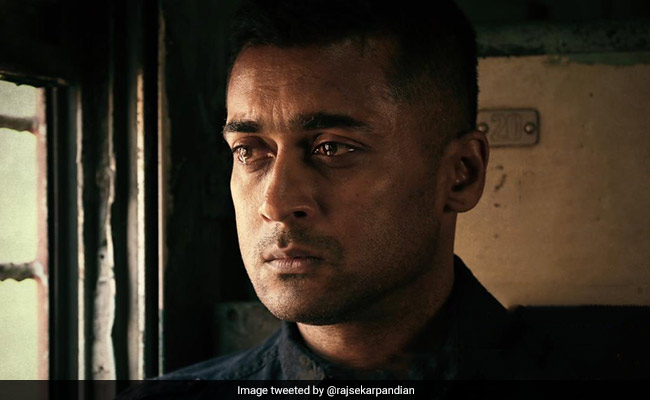 Suriya Sivakumar in a still from the film Soorarai Pottru.(Image courtesy: rajsekarpandian)

Tamil film Soorarai Pottru, which stars actor Suriya Sivakumar in the lead role, has been selected for the 24th edition of the Shanghai Film Festival. The film, that has been directed by Sudha Kongara Prasad, has been selected under the Panaroma Section of the film festival. Rajsekar Pandian, who is the co-producer of the film, shared the update about its selection on Twitter. "Happy that #SooraraiPottru #PraiseTheBrave enters Panorama Section of Shanghai International Film Festival 2021," he wrote on Twitter sharing a poster of Soorarai Pottru. Besides the poster of the film, Rajsekar Pandian also shared screenshots of the list of the films that have been selected for the Shanghai Film Festival.

Soorarai Pottru is loosely based on the life of GR Gopinath, who founded the budget airline Air Deccan. Besides Suriya Sivakumar, the film also stars Aparna Balamurali, Paresh Rawal, Mohan Babu, Kavitha Ranjini and R Madhavan. Soorarai Pottru marks the first Tamil film to release on OTT platform Amazon Prime Video after the closing of theatres due to the COVID-19 pandemic. Produced by the lead actor Suriya, the film was released on Amazon Prime Video last year.

The film has also been making noise for its IMDb rating of 9.1. It is the third film in the IMDb's top 1000 movies. The first two films are the Hollywood classics - The Shawshank Redemption, and The Godfather .

Soorarai Pottru was also selected in the list of 366 films eligible for making the cut in the Best Picture category of the recent Academy Awards. It was dropped from the list later. Soorarai Pottruwas among the ten Indian films that were submitted under the Best Foreign Film category at the 78th Golden Globe Awards.

The Shanghai International Film Festival has been scheduled to take place from June 11 to June 20 this year.