Soorarai Pottru is a biopic on Captain Gopinath, popularly known as the father of low cost airline in India 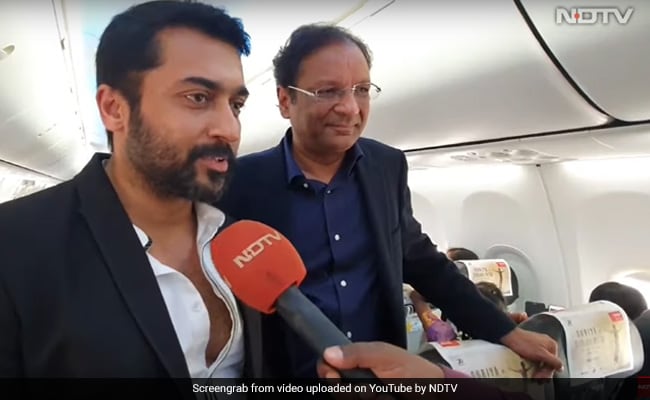 Tamil star Suriya's upcoming film Soorarai Pottru, a biopic on Captain Gopinath - the father of low cost airline in India has generated quite a buzz. A first of its kind music launch was organised inside a thematically branded SpiceJet aircraft displaying picture of the hero and film's name. Besides the star and the crew, present on board were around hundred underprivileged children flying for the first time. The first song, which was played around 3 PM, was played on a big screen many clapped and applauded.

Calling it a tribute to Gopinath, whose role he will portraying, Surya says it's an important story to be told and the film has good commercial entertainment as well. He told NDTV, "Captain Gopinath made the common man fly for one rupee. When every common man wanted to fly and it was his dream, to fly the common man was Gopinath's dream. We've put the story in an interesting manner.”

He added, the film's director Sudha Kongarahe had researched the subject for ten years inspired by Gopinath's book Simply Fly.

Ajay Singh, Chairman of SpiceJet said, “It's an incredibly important story. Captain Gopinath is an icon of our industry. I'm delighted we can be a small part of retelling the story".

Suriya revealed that the children who were selected for the joy ride were chosen on the basis of their essays about their dreams. Touched by their magnanimity around forty such people too were accommodated. Surya added, "This is what makes the unsung heroes of India. It's important to inspire them and show them there is hope. They just have to dream big.”