Suriya And Wife Jyothika Get First Dose Of COVID-19 Vaccine 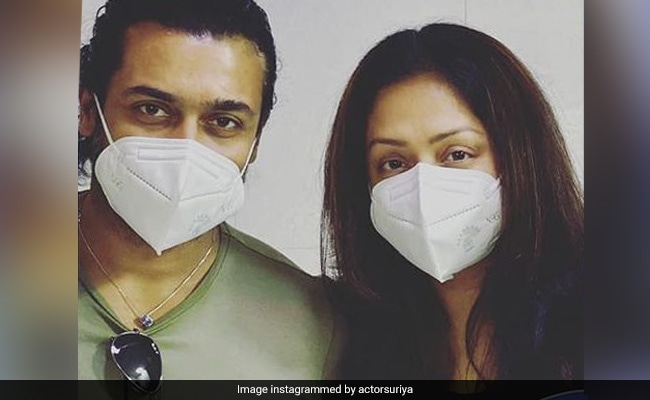 Star couple Suriya and Jyothika received their first dose of the COVID-19 vaccine on Tuesday, pictures from which the actor shared on his Instagram profile. Suriya shared solo shots of himself and Jyothika, along with a picture of them together and he wrote: "#Vaccinated." Suriya tested positive for COVID-19 in February this year and was admitted to a Chennai hospital. He tested negative after a few days and returned home and he was in quarantine for a brief period. The actor resumed work in March this year. He posted a picture from the sets of his upcoming project with filmmaker Pandiraj."Feels good to be back on sets," he tweeted.

Suriya and Jyothika, co-stars of films like Poovellam Kettuppar, Uyirile Kalanthathu, Kaakha Kaakha, Perazhagan, Maayavi, June R and Sillunu Oru Kaadhal, got married in the year 2006. They are parents to a daughter named Diya and son Dev.

In terms of work, the actor was last seen in Soorarai Pottru, which released on OTT streaming platform Amazon Prime Video in November. He has signed an untitled film with director Siruthai Siva. Suriya, who made his debut in 1997 with Nerukku Ner, is best known for his work in the hit Singam series of films, Kaakha Kaakha Vaaranam Aayiram, Nandha, Ghajini, 24 among many others.

Jyothika featured in several hits like Mozhi, Kaakha Kaakha, Sillunu Oru Kadhal and Pachchakili Muthucharam, Seetha Kalyanam and 36 Vayadhinile among many others. She was last seen in the legal drama Ponmagal Vandhal.