Jyothika, In Her "Second Innings," On Why She Signed Ponmagal Vandhal

"There's so much happening around us and it's time to highlight them on screen," said Jyothika 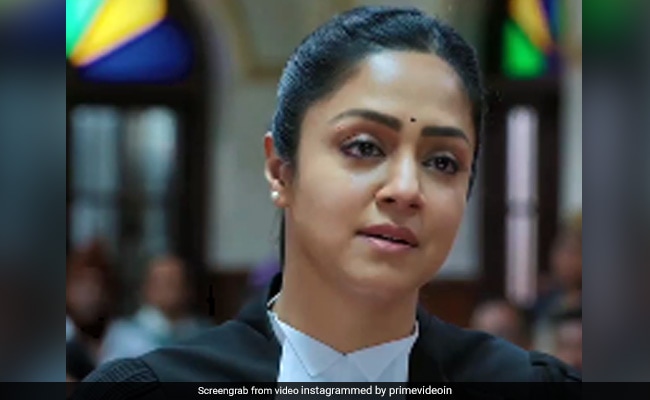 Jyothika in a still from Ponmagal Vandhal. (Image courtesy: primevideoin)

South star Jyothika, who will next be seen in Ponmagal Vandhal, decided to do the JJ Fredrick-directed film as it questions the "legal system in a realistic and presentable way." The actress, in an interview with news agency PTI, revealed that in her second innings as an actor, she has been focusing more on films that "highlight" social issues onscreen and that's why she agreed for Ponmagal Vandhal. In the crime-thriller, which focuses on the system's failure in handling child abduction and rape cases, Jyothika plays the role of a fiery lawyer named Venba. Taking about the film, the actress told PTI: "I read about crimes against women and children almost every other day in papers. I'd often discuss it with Suriya (her husband and actor) at home about why the law is taking so much time for justice when it comes to these cases."

"So when Fredrick (the director) brought a script that was questioning our legal system in a realistic and presentable way, I really got attracted to this project. Playing a lawyer was refreshing because no other leading lady in Tamil cinema in recent years had played a lawyer," she added.

In the first phase of her career, Jyothika featured in several hits like Mozhi, Kaakha Kaakha, Sillunu Oru Kadhal and Pachchakili Muthucharam and played substantial roles in most of them. After appearing in the 2009 film Seetha Kalyanam, she took a long sabbatical from films and later returned to the big screen with Rosshan Andrrews' 36 Vayadhinile. Since her comeback, the actress has been very careful about her projects.

In the same interview, Jyothika shared how being a mother plays an important factor in her choice of films. "There's so much happening around us and it's time to highlight them on screen. I'm a mother of two young children and I stop them from seeing so many films because of its content. Even in quarantine, there are very few films that they can watch. In my second innings, I wanted to do films that even they can watch and this is why I choose my scripts carefully," she told PTI. Jyothika married actor Suriya in September 2006 and the couple are parents to a daughter named Diya and son Dev.

Jyothika's Ponmagal Vandhal is one of the few films that will premiere on Amazon Prime Video instead of theatres due to the coronavirus outbreak. The actress told PTI that the makers decided to go with the online release keeping in mind the current scenario and the "traffic of films vying for theatrical release." She said: "It took us some time to understand what we were doing but we knew this is a beautiful platform for content-driven films. As we all know that theatres won't open for few more months and there will be a traffic of films vying for release, we didn't even see a chance of Ponmagal Vandhal coming out for at least a year and a half. Given these factors, this was the best decision."

Jyothika added that small, content-rich films like her latest have to wait for months to find a suitable theatrical release but with the help of streaming platforms, they can have a bigger audience exposure. "It's a matter for pride for Tamil cinema, especially for small, content-rich films which generally have to wait months and even years to find a theatrical release. At the end of the day, it makes me feel like a hero that my film will be released in over 200 countries. We are going global and I hope to earn a new set of audiences," she said, and added: "I also feel that our films need as much respect as the bigger, hero-centric films get. We need more audiences to watch our films. We put three times the effort in making these films as it's completely script-oriented. I think we all deserve equal amount of respect which we get from such a platform."

The trailer of Ponmagal Vandhal dropped on the Internet last week. Talking about the trailer's success, Jyothika said: "My film's trailer clocked over 10 million in just 2-3 days. It's a never before attained feat for any of my films" and added: "This is proof to the phenomenal reach of the platform."