After COVID-19 Recovery, Suriya Sivakumar Writes: "Feels Good To Be Back On Sets"

Tagging the film's team, Suriya Sivakumar wrote: "Feels good to be back on sets!" 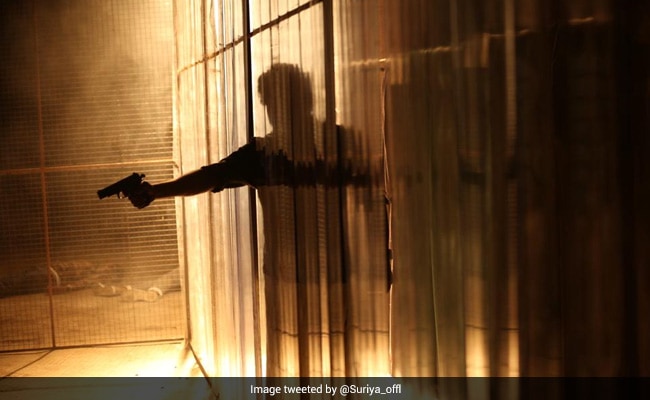 Suriya Sivakumar is back on sets, here's proof (courtesy Suriya_offl)

South star Suriya Sivakumar found a top spot on the trends list on Thursday as he checked on to social media to announce h's back on film sets. Suriya was diagnosed with COVID-19 in February and was admitted to a Chennai hospital. He tested negative in a few days and returned home but only to remain in quarantine for a brief period. On Thursday, Suriya shared a photo from what appears to be his upcoming movie with filmmaker Pandiraj. Tagging the film's team, Suriya shared his feelings of resuming work and wrote: "Feels good to be back on sets!" In the photo, Suriya's face is hidden in a play of light and shadow - however, he can be seen pointing a gun in the frame.

Here's what Suriya Sivakumar tweeted about returning to work:

Feels good to be back on sets! @pandiraj_dir@RathnaveluDop@immancomposer@sunpictures@AntonyLRuben@jacki_art@anbariv#Suriya40pic.twitter.com/gcxlpdafwc

On February 11, Suriya's brother Karthi, also an actor, shared an update about his health and wrote: "Anna is back home and all safe! Will be in home quarantine for a few days. Can't thank you all enough for the prayers and best wishes."

Anna is back home and all safe! Will be in home quarantine for a few days. Can't thank you all enough for the prayers and best wishes!

Karthi's tweet was a follow up to Suriya's post, revealing he had contracted the coronavirus. He posted a tweet in Tamil, which translates to: "I am undergoing treatment for Covid-19 and am better now. Let us all realise that life hasn't returned to normalcy yet. We also cannot be filled with fear and let life come to a standstill. We still need to be careful and safe. Lots of love and gratitude to the dedicated doctors and medical staff standing by my side."

Suriya Sivakumar's new film will mark his third collaboration with director Pandiraj after Pasanga 2 and Kadaikutty Singam, in which he featured in a cameo alongside brother Karthi, who played the lead. Suriya Sivakumar was last seen in the critically acclaimed Soorarai Pottru, which briefly joined the Oscar race for this year but couldn't make it to the nominations.

World Happiness Day 2021: For Samantha Ruth Prabhu, Happiness Is All About "Little Wins And Little Joys"