Sunny Leone Is Here To Pierce "Through Your Heart" 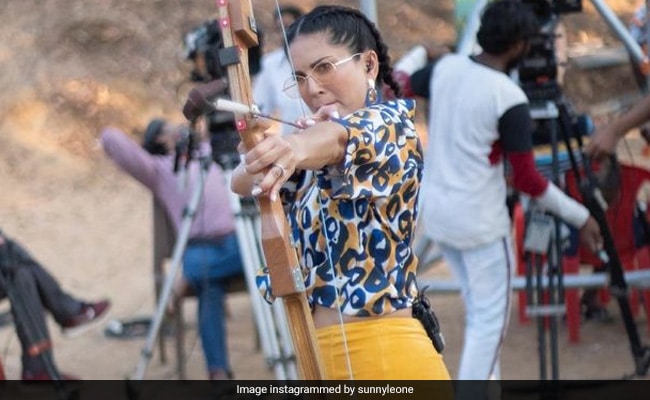 Wait, is that Sunny Leone  acing an archery shot? Yes, that is what it is. We cannot think of anything that the multi-talented diva cannot do. Also, we definitely cannot get over how stunning she looks while aiming the arrow. Looking sharp as a knife, the actress caught the camera's attention while trying her hand at the sport. Sunny Leone's dress code was as fun as her day- a printed shirt blouse and a pair of shorts in sunshine hue. She let her boxer braids and statement sunshades do the rest of the talking. And we see her point. To caption the post, she wrote: “Through your heart.” We don't know more but we are surely excited to find out what happened at the other end of the shot. Aren't you?

The 40-year-old is busy hosting the television reality show Splitsvilla season 13 alongside actor Rannvijay Singha in Kerala. If you scroll through her Instagram timeline, you will go green with envy to see her workdays look all things fun. A day ago, Sunny Leone cracked us up with a delightful moment with Rannvijay from the sets. Sharing a goofy still with her co-host, she wrote: “Looks more like the game “whack a mole”!” and tagged the actor. Seems Rannvijay could not agree more as he commented, “It does!”

It was just a few days ago, Sunny Leone posted one hilarious video. She is too cute for words in the “prank gone wrong” clip. What Sunny Leone thought would be a great way to intimidate the crew actually ended up failing and also cracking her up. Here is a glimpse of what a day at work on the sets looks like for the actress.

Meanwhile, Sunny Leone has already announced her next film titled Shero. The psychological thriller, directed by Sreejith Vijayan, will be released in Hindi, Tamil, Telugu and Malayalam.