Just Another Fun Day At Work For Sunny Leone

Sunny Leone’s work scene is all about fun 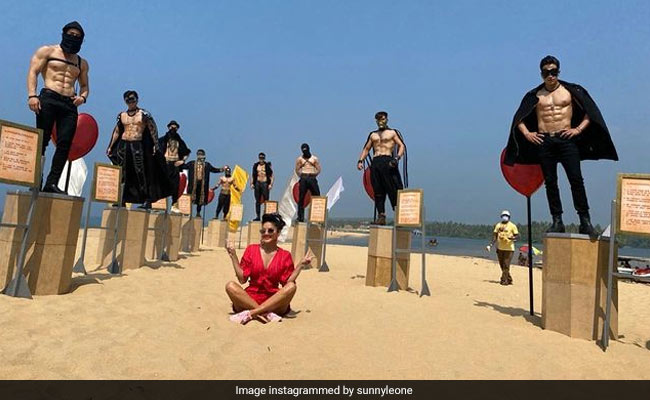 If only our workday looked half as fun as Sunny Leone's. You can check her latest Instagram entry if you don't believe us. The actress is currently hosting the television reality show MTV Splitsvilla season 13 along with actor Rannvijay Singha in Kerala. And, we highly doubt that anyone can look as chirpy as the 40-year-old during a hectic day. In the upload, Sunny Leone is sitting on beach sand surrounded by all the male contestants. Seems like the picture is taken during a task. The participants are seen standing on a medium height podium as they pose shirtless wearing a black cape and trousers each. The actress is all pumped up as she strikes a pose for the camera. She is wearing a bright red outfit and sneakers. “I swear, I was working,” wrote the actress on Saturday.

Sunny Leone keeps sharing fun moments from the sets. In case you missed it, yesterday she shared a goofy behind-the-scenes clip. We saw Sunny Leone trying her best to prank the crew. She walked into the room where all the members were having food and said, “It is 2 pm. Lunchtime is over.” Not only did the crew seem unperturbed, they, in fact, burst out laughing as a result of the failed prank. "Prank gone wrong,” she wrote along with the clip.

Sunny Leone has been shooting in Kerala for several months. She had to return to Mumbai in April after a lockdown was declared.

She will be next seen in Shero, which will be released in Hindi, Tamil, Telugu and Malayalam. The psychological thriller is directed by Sreejith Vijayan. Sunny Leone also has the web series titled Anamika in her kitty. The show is directed by Vikram Bhatt.