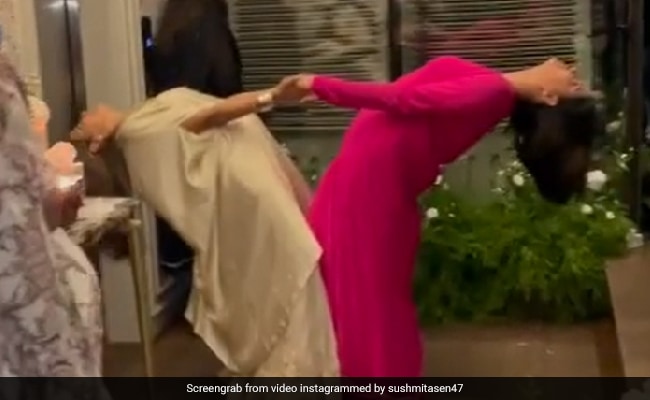 Sushmita Sen in a still from the video. (courtesy: sushmitasen47)

Sushmita Sen takes her fitness regime very seriously, so much so that she actually started stretching in the middle of a party. So earlier this week, Sushmita Sen attended an Eid party hosted by Arpita Khan Sharma at her Mumbai residence. However when she met fitness instructor Yasmin Karachiwala, the actress started stretching in the middle of the party. She shared a video on her Instagram profile and she wrote: "Hum dono... Aadat se majboor. This beautiful and strong lady Yasmin Karachiwala makes me stretch and land into the warmest hug... In the midst of a party (minor detail)." She added in her caption: "Refreshing energy and vibe you possess my darling Yasmin! A memorable evening indeed." She added the hashtags #sharing, #goodness, #spirit, #sisterhood and #energy to her post.

Check out the post shared by Sushmita Sen here:

On Wednesday evening, Sushmita Sen shared a picture with Salman Khan from the party and she wrote: "I hope you all celebrated Eid with your loved ones...Well wishers...and in the company of goodness! I know I did. Allah aapki saari jaayaz duaaiye qubool karein. My love and respect to all at home! I love you guys so so much."

Sushmita Sen has quite a bit of a reputation as a fitness enthusiast. The actress often shares videos from her workout diaries. Take a look at some of the posts here:

Sushmita Sen was crowned Miss Universe in 1994. She made her Bollywood debut in the 1996 film Dastak. She has featured in films such as Biwi No 1, Do Knot Disturb, Main Hoon Na, Maine Pyaar Kyun Kiya and Tumko Na Bhool Paayenge and No Problem. She was last seen in the web-series Aarya 2.

Sushmita Sen is a single mom to daughter Alisah - Sushmita adopted Renee in 2000 while Alisah joined the family in 2010. Renee made her acting debut with a short film.