This happened at the success party of RRR - Rise, Roar and Revolt. 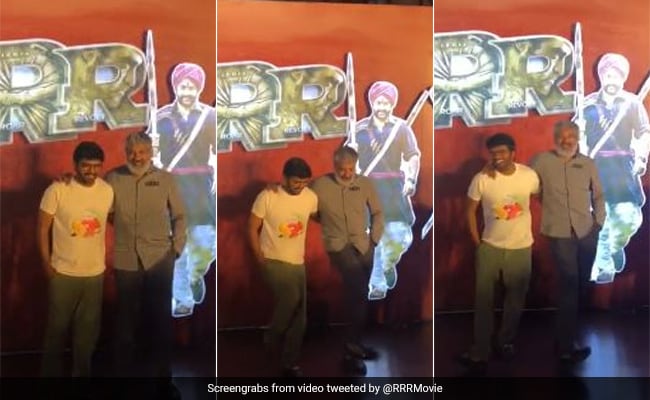 Imagine SS Rajamouli dancing to the tunes of Naatu Naatu. Unbelievable, did we hear? Allow us to prove you wrong. The director has done it. And, we have the video. This happened at the success party of RRR - Rise, Roar and Revolt. SS Rajamouli, in one of the interviews, had promised that he will perform the hook step of the peppy song if RRR becomes a hit. Well, as they as a promise is a promise. And, Rajamouli stayed true to his words. In the video, he is performing the Naatu Naatu signature step. And, we are loving it. The makers have shared a video on Twitter and wrote, “Our director SS Rajamouli fulfilled the promise he made to Jr NTR in an interview.”

RRR stars Jr NTR and Ram Charan in lead roles. The plot is set in 1920s. It is a fictitious tale based on two legendary freedom fighters - Alluri Seetharamaraju and Komaram Bheem. Well, it's time to take a look at SS Rajamouli's dance performance:

RRR, which was released on March 25, has created a lot of buzz for all the right reasons. And, as per Trade analyst Taran Adarsh, the film is set to cross the lifetime business of the Bollywood movie Sooryavanshi, starring Akshay Kumar, today. In a tweet, he wrote, “RRR will cross lifetime business of Sooryavanshi today... Will cruise past ₹ 200 cr tomorrow [Wednesday; Day 13], thus becoming the second Hindi film to hit ₹ 200 cr mark [post pandemic]....”

RRR also stars Alia Bhatt and Ajay Devgn in cameo roles. Ajay Devgn's character, as per the filmmaker, is the soul of the film. During an interaction with The Indian Express, Rajamouli had said, “A role cannot be based on its length. Both Alia Bhatt and Ajay Devgn's roles are very important. If we look at RRR as a body, then Ajay sir's character in the film is its soul. And we know there are two forces, two powerhouses in the movie, and if there is one person who has to balance them, who has the ability and the strength to contain them, then it is Sita, played by Alia Bhatt.