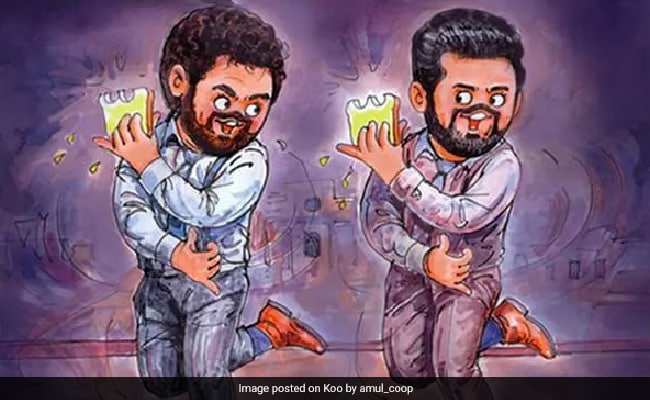 It's RRR day. And, we simply can't contain our excitement. Do we need to say more?  Well, we aren't the only ones here. Dairy brand Amul is with us in this. Yes, the Gujarat-based company has shared a tropical dedicated to RRR- Rise, Roar, Revolt. It features a sketch of Jr NTR and Ram Charan. The caricature has taken inspiration from the film's hit song Naatu Naatu. The two are striking the signature pose with a slice of bread in their hands. The text on the top reads, “TeRRRific Butter”. Along with the post, Amul wrote, “ Much-awaited magnum opus releases.”

RRR, directed by SS Rajamouli, also stars Ajay Devgn, Alia Bhatt, Samuthirakani, Ray Stevenson and Olivia Morris. Ajay Devgn's character, as per the filmmaker, is the soul of the film. Alia features as Sita in the multilingual movie. Speaking to Indian Express, SS Rajamouli had said, "A role cannot be based on its length. Both Alia Bhatt and Ajay Devgn's roles are very important. If we look at RRR as a body, then Ajay sir's character in the film is its soul. And we know there are two forces, two powerhouses in the movie, and if there is one person who has to balance them, who has the ability and the strength to contain them, then it is Sita, played by Alia Bhatt.”

"They are playing cameos in the film, I am not going to cheat the audience about it. In terms of importance, they are equally and sometimes they are more important than the heroes themselves," he added.

RRR, a fictitious tale, is based on two freedom fighters - Komaram Bheem and Alluri Seetharamaraju,  who fought against the  British Raj and Nizam of Hyderabad. It is written by Vijayendra Prasad.  The music composition is by MM Keeravani. DVV Entertainment has backed the film. It is being said that the film was made on a budget of ₹ 336 crore.

SS Rajamouli's last movie was Baahubali 2: The Conclusion, released in 2017.