Sridevi Was One Of The Reasons I Became An Actor: Priyanka Chopra's Tribute

Priyanka Chopra also shares the last memory she has of Sridevi 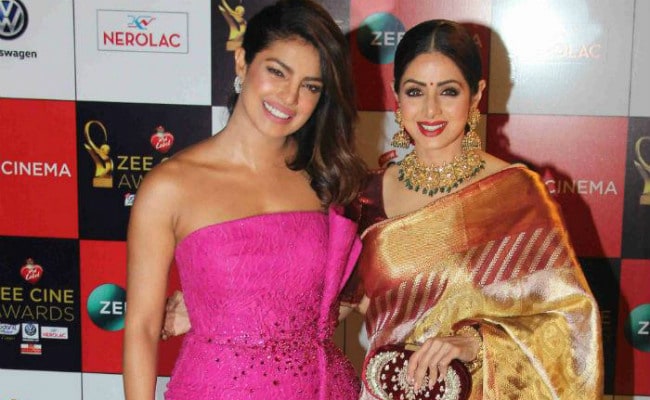 New Delhi: "Everyone wanted her and wanted to be like Sridevi," writes Priyanka Chopra as she remembers the late actress in a beautiful note written for TIME. "She was my childhood, and one of the big reasons I became an actor. To refer to all of us as mere fans would be a disservice to her," the actress added in her memoir for "India's first female superstar." Last week, we all witnessed a grim Saturday when the death of Sridevi left a black-hole shaped gap in our lives. Bollywood was left grieving with condolences and messages mourning the Chandni of Bollywood poured in on social media. Priyanka Chopra, was also one of those who were at a loss of words after the news of Sridevi's death broke. "I have no words. Condolences to everyone who loved #Sridevi . A dark day. RIP," she tweeted.

Now, in her heart-felt tribute to Sridevi, Priyanka also shares the last memory she has of the late actress. "My last memory of her is a red-carpet moment last December. In the frenzy of flashbulbs and whirring cameras, she pulled me into a tight hug and spoke lovingly and excitedly about her two daughters, Jhanvi and Khushi," Priyanka writes in the heartfelt piece. "She left us too soon," adds Priyanka.

"She left me feeling warm and fuzzy, and with a promise to meet again. But angels don't pass on. They just shine brighter in another realm-so I will always look out for her in the sky. Thank you for the magic, Sri ma'am. Forever your fan," is how Priyanka rounded off her piece, which will be remembered for long.

Priyanka is currently in New York because of her ongoing TV show Quantico and her other work commitments. Subsequently, she could not attend Sridevi's last rituals in Mumbai. Earlier this week however, this is what she had tweeted: "Ye Lamhe , ye pal hum har pal yaad karenge.. ye mausam chale gaye toh hum fariyad karenge."

On late Saturday evening, Sridevi died in Dubai and the cause of her death has been identified to be accidental drowning in the hotel bathtub - investigation was carried out by Dubai police. Sridevi was in UAE for the wedding festivities of nephew Mohit Marwah. Sridevi was flown back to Mumbai late on Tuesday night and a condolence meet and funeral were organised by the Kapoors on Wednesday.