'Sridevi And I Were Like Brother And Sister,' Says Kamal Haasan

"Those days, couples (at weddings) were compared to us, saying they looked like Kamal and Sridevi. They must have seen us singing duets and hugging. We hid the truth (about the nature of the relationship) so as to not shatter that dream,"said Kamal Haasan 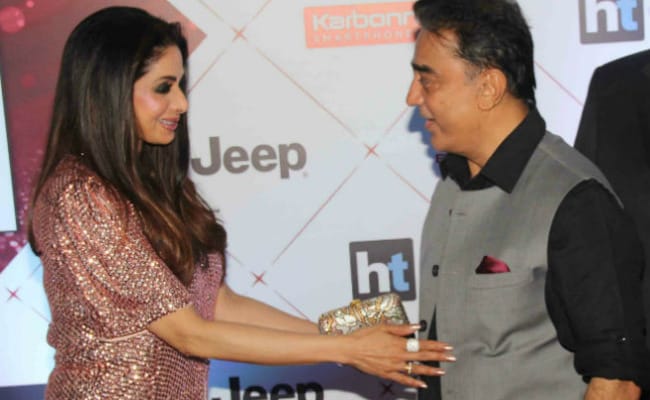 New Delhi: The Sridevi-shaped black-hole in our lives has left the film fraternity grieving with the superstar's co-stars and friends revisiting the many memories they had cherished with her. Kamal Haasan, however, classifies the nature of his relationship with the late actress as special - while the two were celebrated as a successful onscreen couple, in real life, Kamal Haasan and Sridevi shared a sibling-like chemistry, said the Tamil superstar, reported news agency PTI. Kamal Haasan opened up extensively about his co-star Sridevi in his weekly piece for Tamil magazine Ananda Vikatan, said PTI. "Sridevi en thangachi (Sridevi was my younger sister)," the news agency quoted an excerpt from Mr Haasan's piece.

But, Mr Haasan added, the industry insiders had a fair idea about their real-life rapport and hence, he was asked to not discuss the nature of his bond with Sridevi. "Those days, couples (at weddings) were compared to us, saying they looked like Kamal and Sridevi. They must have seen us singing duets and hugging. We hid the truth (about the nature of the relationship) so as to not shatter that dream," PTI added another excerpt from Mr Haasan's weekly article. Referring to certain onscreen religious figures or god couples, played by young artistes who used to address their counterparts as 'annan-thangachi' (siblings), Mr Haasan said: "Me and Sridevi were like one such annan-thangachi (brother and sister)."

"If our acting was watched keenly, we would look like siblings. One could find resemblance of myself in her acting," he added, reported PTI.

Sridevi and Kamal Haasan cherish a history of being a popular onscreen couple, with their films like 1982's Moondram Pirai (Tamil) and it's Hindi remake 1983's Sadma being absolute super-hits. Kamal Haasan also shared screen-space with Sridevi in Tamil films like 16 Vayathinile, Vaazhve Maayam, Varumayin Niram Sivappu and Guru.

It was in 1976 film Moondru Mudichu, when Sridevi worked with Kamal Haasan for the first time - she was just 13. Rajinikanth also starred in the movie, which was her first project as a full-fledged heroine. Earlier this week, in tweets mourning his Sadma co-star, Kamal Haasan wrote: "Have witnessed Sridevi's life from an adolescent teenager to the magnificent lady she became. Her stardom was well deserved." In his new piece for the magazine, Mr Haasan echoed his feelings, writing she "became Sridevi by sheer hard work."

Mr Haasan added, their pairing was an instant hit with filmmakers, and even before the two stars were consulted for a movie, filmmakers decided without much deliberation "that the two will pair opposite each other." Mr Haasan confessed about his reaction at that time - "Sridevi again?" - but having said that, he also added that soon, "all heroes desired to act with her."

On late Saturday evening, Sridevi died in Dubai and the cause of her death has been identified to be accidental drowning in the hotel bathtub - investigation was carried out by Dubai police. Sridevi was in UAE for the wedding festivities of nephew Mohit Marwah. On Monday evening, Kamal Haasan visited Anil Kapoor's residence to be by Sridevi's family. Joining him were Rajinikanth and his wife Latha Rajinikanth. 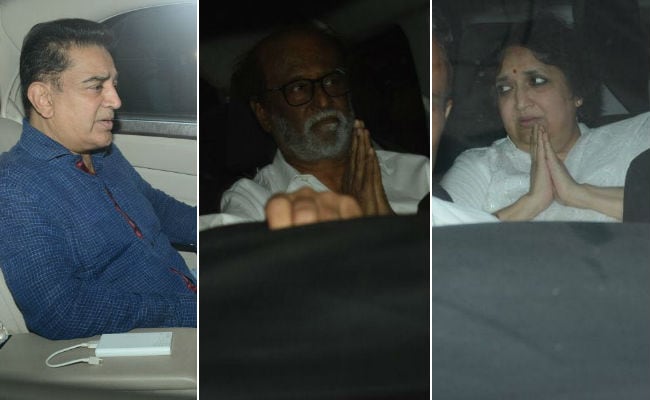 Promoted
Listen to the latest songs, only on JioSaavn.com
Sridevi was flown back to Mumbai late on Tuesday night and a condolence meet and funeral were organised by the Kapoors on Wednesday.