"The love she had for me was so tremendous and intense," said Rani Mukerji 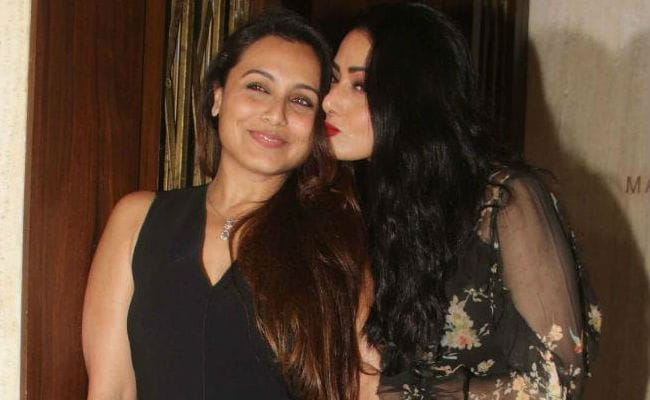 New Delhi: Rani Mukerji talked about the strong bond she shared with late actress Sridvei, who was cremated with state honours on Wednesday. Rani Mukerji told Firstpost that Sridevi fondly called her "laddoo" and that it feels "surreal to talk about her in past tense." Rani Mukerji said: "The love she had for me was so tremendous and intense that I feel somewhere I have lost a guiding light in my life. She has been my inspiration personally and professionally." Rani Mukerji said she visited the sets of Sridevi's film after school hours and that's where she first met the Chandni actress. "I used to go in my school uniform and bag and watch her shoot. She worked in one of the productions of my uncle, Shomu Mukherjee. She remembered me as that kid," Rani told Firstpost, adding that they reconnected later "in a very different way."

"She used to call me laddoo. She would say, 'Arre my laddoo' each time I met her and I am going to miss that," Rani Mukerji added. A PTI report stated that Rani Mukerji stood beside Sridevi when celebrities, fans and media offered condolences at the prayer meet yesterday. "I feel extremely sad that two people who loved me immensely, my dad and Sriji, who would have given their genuine reaction for my movie, both are missing from my life now. It's a huge loss for me," Rani told Firstpost.

Rani Mukerji said that Sridevi had called her after watching the trailer of her upcoming film Hichki and was very keen to watch the film. "She called me after seeing the trailer and said, 'Laddoo, I have to see this movie'. I told her, 'Yes ma as soon as the movie is ready, I can show it you'," said Rani.

Rani also told Firstpost that Sridevi was like an elder maasi (aunty) to her two-year-old daughter Adira. She said: "Since I had a child, she's been very supportive these last two years. She has been so inspirational. The kind of love that she has given to me and Adira has been phenomenal."

Promoted
Listen to the latest songs, only on JioSaavn.com
Sridevi died by accidently drowning in the bathtub of the hotel room she was staying in Dubai. She was flown to Mumbai three days later after all the legal formalities were over. A formal condolence meet and funeral was organised by the Kapoors on Wednesday.