After Sridevi's Funeral, A Statement By The Kapoor Family 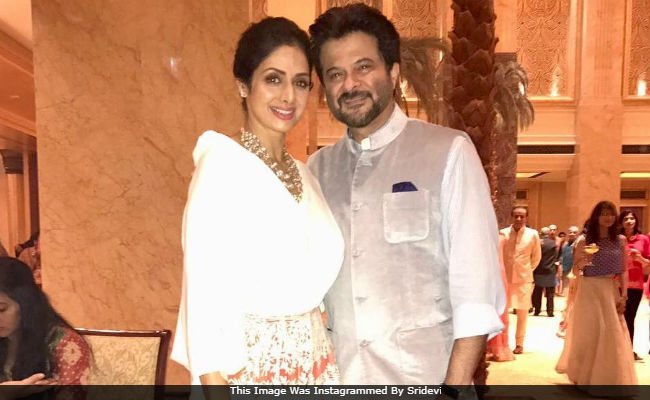 New Delhi: Iconic actress Sridevi's family have issued a statement after she was cremated with state honours in Mumbai on Wednesday. "The past few days have been trying times for us as a family. Today, particularly, has been one of the hardest. We laid to rest a beautiful soul who has gone too soon. She leaves behind a legacy that is unique. Her talent was undeniable, her beauty unmatched and her ability to connect with the audience was legendary. Sri had the same connect with her family as well," read an excerpt from the statement, posted on social media by Sridevi's brother-in-law Anil Kapoor, his children Sonam, Rhea, Harshvradhan and other family members. The statement also made a plea on behalf of Sridevi's young daughters, Janhvi and Khushi Kapoor.

Sridevi was wrapped in the national flag for the journey to the crematorium. Amitabh Bachchan, Shah Rukh Khan, Katrina Kaif and others attended the funeral. Before the last rites, a multitude of stars bid Sridevi a final farewell at a club in Lokhandwala. The mourners included Chiranjeevi, Madhuri Dixit, Aishwarya Rai Bachchan, Deepika Padukone, Hema Malini, Kajol and Ajay Devgn, Vidya Balan and many, many others.

Thousands of fans, holding flowers and photos, also lined up for a last glimpse of Sridevi. Some had travelled to Mumbai from Chennai and Karnataka.

Sridevi died on Saturday in Dubai. She was 54 and had spent the last week attending nephew Mohit Marwah's wedding in UAE. Sridevi's death has been ruled accidental by Dubai authorities - a postmortem revealed that she had drowned in her hotel bathtub. Husband Boney Kapoor was in the hotel room when she died. Other family members - stepson Arjun and brother-in-law Sanjay Kapoor - flew to Dubai to bring Sridevi home. Back in Mumbai, Anil Kapoor's home became a point of convergence for grieving Bollywood colleagues. Among the visitors were Rajinikanth and Kamal Haasan, Sridevi's very first co-stars in 1976's Moondru Mudichu, her first film as lead actress

Promoted
Listen to the latest songs, only on JioSaavn.com
In a career spanning for over 50 years, Sridevi had made 300 films in several languages. Her best known Hindi films are Sadma, Mr India, Himmatwala, Chaal Baaz, Mr India and English Vinglish. Her last film was MOM and Shah Rukh Khan's Zero will see Sridevi in a posthumous cameo.

Sridevi is survived by husband Boney Kapoor and daughters Janhvi and Khushi.