Spotted At Work: Kareena Kapoor And A Cute Baby Bump

"Working with the sis always the best #sistersquad #behindthescenes," Karisma captioned her post. 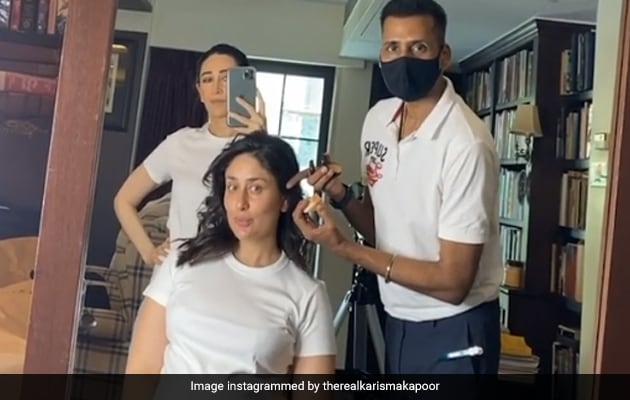 Kareena Kapoor and sister Karisma Kapoor had a work date on Tuesday morning - the Kapoor sisters were spotted shooting at Kareena's Mumbai residence. While photos of the sister duo, shooting at Kareena's balcony, went crazy viral on the Internet, Kareena and Karisma checked into Instagram for a quick update. Twinning in white tees and denims, Kareena and Karisma featured in a boomerang video while getting their make-up done. "Working with the sis always the best #sistersquad #behindthescenes," Karisma captioned her post. Kareena is in her second trimester of pregnancy and her outfit revealed her adorable baby bump. Kareena's pregnancy glow is equally unmissable?

Karisma Kapoor, clearly not an early bird, shared this update on Tuesday morning.

After months of lockdown, Kareena returned to work during in first few months of pregnancy. She wrapped the schedule of her upcoming movie Laal Singh Chaddha earlier this month. Sharing her experience of working during the pandemic, she wrote this in her farewell note: "And all journeys must come to an end. Today, I wrapped my film Laal Singh Chaddha... tough times... the pandemic, my pregnancy, nervousness but absolutely nothing could stop the passion with which we shot, with all safety measures of course."

Kareena Kapoor and Saif Ali Khan announced their second pregnancy in August. The couple are also parents to son Taimur. Earlier this month, Kareena said she's in her fifth month of pregnancy. Kareena's Laal Singh Chaddha is scheduled to release on Christmas 2021.