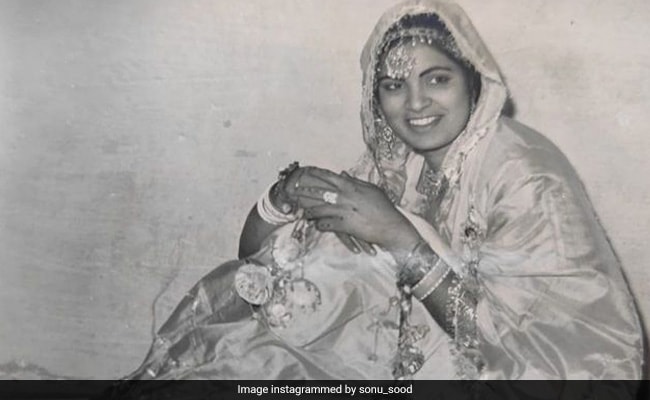 Actor Sonu Sood needs no introduction. After winning people's hearts with his versatile performances, the actor became the nation's sweetheart with the philanthropic activities that he undertook in light of the COVID-19 pandemic. In an effort to reach a larger audience, Sonu Sood is often seen using his social media accounts to share information and details of his humanitarian endeavours and professional updates. However, on Wednesday, he posted a personal and heartfelt note on Instagram on the occasion of his mother's birth anniversary. He shared the note along with few beautiful, vintage pictures of his mother.

In the caption, Sonu Sood wrote, “Happy birthday Maa. I wish I could wish you personally every year with a hug and thank you for the lessons of life that you have taught me. I promise to give my best always and make you proud. These messages can never express how much I miss you. The vacuum that has been created in my life without you will always remain the same till I see you again. Stay happy where ever you are and keep guiding me always. Love u maa.” Some of the images feature Sonu Sood's mother looking ethereal in her bridal trousseau.

He had also earlier shared another image of himself along with his mother. In the vintage photo which features Sonu Sood as a toddler,  the doting mother is seen looking fondly at her son.

Previously, on the occasion of Father's Day, Sonu Sood had shared vintage photos of his father. In the caption, he wrote, “Miss you Papa.” Reacting to the post, director Farah Khan dropped a heart emoji in the comment section. The two had collaborated for the film Happy New Year, which featured Shah Rukh Khan in the lead role.

The actor also had his fans asking for more when he shared throwback photos of himself from his modelling days. Dressed in a trench coat and rocking a stubble, Sonu Sood looks dapper as ever in the photos. Along with the images, he wrote in the caption, “Throwback to the modelling days in Mumbai.” Take a look at the photos here.

Sonu Sood made his acting debut with the 1999 Tamil film Kallazhagar. His first film in Bollywood was Shaheed-E-Azam.  His other well-known projects include movies such as Dabangg, Yuva, Athadu, Jodhaa Akbar, Dookudu, and Shootout At Wadala.