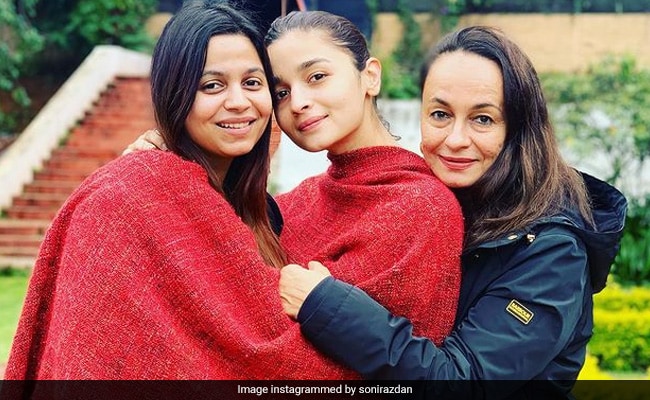 If Soni Razdan's latest Instagram entry doesn't compel you to say aww, we don't know what will. The Bollywood veteran posted a super cute picture of herself with her daughters Alia and Shaheen Bhatt and it has the Internet's heart. In the picture, the trio can be seen happily posing for the picture as they stand at a lush green spot. Soni Razdan  added a caption to her post which had rhyme on point. "One ... two ... and three ... these two and me," she wrote. She added the hashtags #mothersndaughters, #myworld and #bestdaughtersever to her post.

Alia Bhatt and Shaheen Bhatt are the daughters of filmmaker Mahesh Bhatt and actress Soni Razdan. Shaheen Bhatt is the author of the book I've Never Been (Un)Happier, in which she opened up about dealing with depression. Soni Razdan's daughters frequently make appearances on her Instagram profile. See some of the posts here:

Soni Razdan is best-known for her performances in films like Trikaal, Mandi, Page 3, Khamosh, Monsoon Wedding, No Fathers In Kashmir, Yours Truly and Raazi, in which she co-starred with her daughter Alia Bhatt.

Alia Bhatt  has a busy schedule this year, with several film releases lined up. Her upcoming projects include Ayan Mukerji's fantasy trilogy Brahmastra, co-starring boyfriend Ranbir Kapoor and Amitabh Bachchan. She will also be seen in SS Rajamouli's RRR and Gangubai Kathiawadi, which has been directed by Sanjay Leela Bhansali. It is her first project with the filmmaker. Alia Bhatt was last seen in Sadak 2, co-starring Aditya Roy Kapur, Sanjay Dutt and Pooja Bhatt.