Alia Bhatt "Shines" Bright Like The Sun In This Vacation Pic

As usual, Alia's no make-up look left her fans in awe 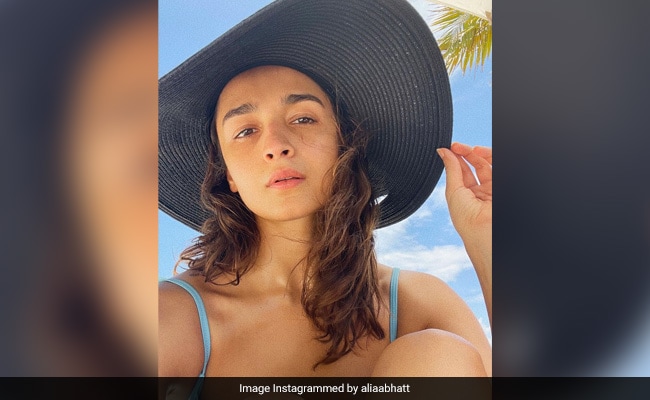 Alia Bhatt, who was shooting for SS Rajamouli's RRR in Hyderabad, lit up Instagram on Monday by sharing a beautiful picture of herself from her vacation diaries. As usual, Alia's no make-up look left her fans in awe. The actress shines bright like the sun in the selfie that features her sporting a sun hat and posing underneath a shade and a tree. "Smile dream shine," Alia Bhatt wrote in the caption of her post and added a moon icon to it. Her fans flooded her post with red heart emojis in the comments section. Take a look:

Alia Bhatt went on a beach vacation earlier this year with her friends Anushka and Akansha Ranjan. She checked into Instagram from her holiday with stunning pictures of herself having a whole lot of fun on the beach. Check them out here:

Alia Bhatt was filming RRR in Hyderabad. Recently, she shared a video showing the making of RRR. See it here:

Ali, who turned into a producer earlier this year, has also been working on her production debut Darlings. She also stars in the film alongside Shefali Shah and Vijay Varma.

In terms of work, Alia Bhatt was last seen in her father's project Sadak 2. She co-starred with Sanjay Dutt and Aditya Roy Kapur in the film. Alia has many films lined up. She will next be seen in Ayan Mukerji's Brahmastra with boyfriend Ranbir Kapoor, Amitabh Bachchan and Nagarjuna Akkineni, in Karan Johar's Rocky Aur Rani Ki Prem Kahani and in Sanjay Leela Bhansali's Gangubai Kathiawadi.