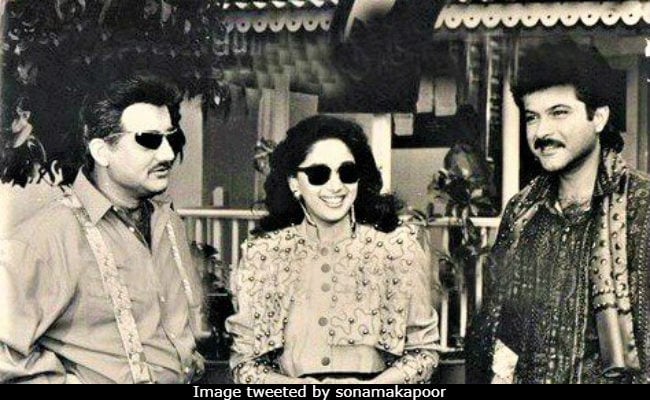 Sonam Kapoor chanced upon a black-and-white photo of dad Anil Kapoor, Madhuri Dixit and Anupam Kher from a film's set and had to had to share it on social media. Tweeting the photo, the 33-year-old actress quizzed her dad and all those present in the photo about the story behind it. Anil Kapoor was quick to spot the post and revealed that the photo was clicked on the sets of 1992 film Khel. The trio were shooting in Kenya, he said: "I don't remember exactly what we were discussing probably making post pack up plans? But this was while we were shooting in Nairobi, Kenya for Khel! Thank you for sharing this Sonam!"

I don't remember exactly what we were discussing probably making post pack up plans? :p but this was while we were shooting in #Nairobi#Kenya for #Khel! @AnupamPKher@MadhuriDixit#GoodTimes
thank you for sharing this @sonamakapoor! https://t.co/RDZU4DJjoL

Dad, look what I found! Do you guys remember this? @AnilKapoor@AnupamPKher@MadhuriDixit#ThrowbackThursday
: @FilmHistoryPicpic.twitter.com/epd2HHylJw

Anil Kapoor and Madhuri Dixit were directed by Rakesh Roshan in Khel, which till date, remains one of the popular thriller-comedies of the Nineties. In the film, Anil Kapoor and Madhuri Dixit play two con artistes, who eventually collaborate to dupe a wealthy old woman, who is in search of her lost grandchild. Anupam Kher plays the Madhuri's onscreen partner-in-crime in the film.

Anil Kapoor and Madhuri Dixit were one of the most popular onscreen jodis of the late Eighties and early Nineties. They famously co-starred in 1989 films Tezaab, Ram Lakhan and Parinda. Madhuri and Anil Kapoor also co-starred in movies like Jamai Raja, Rajkumar Dharavi and Jeevan Ek Sanghursh and then later in projects like Lajja and Pukar.

Meanwhile, Anil Kapoor and Sonam Kapoor will co-star in Ek Ladki Ko Dekha Toh Aisa Laga, which releases on February next year. Sonam will share screen space with her father for the first time and the duo will translate their real life relation onscreen. While Sonam also has The Zoya Factor in the pipeline, Anil will also be seen in the Abhinav Bindra biopic with Harshvardhan Kapoor.