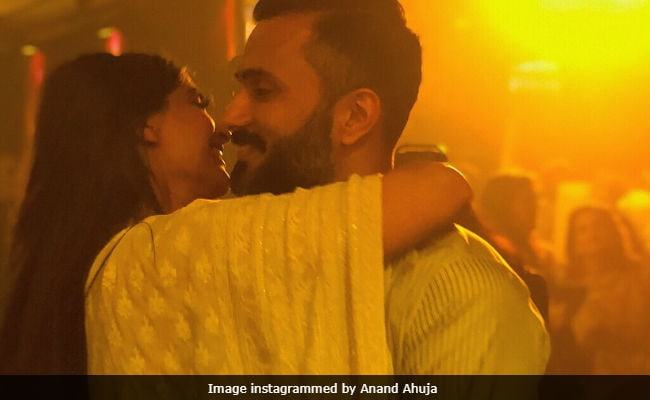 New Delhi: Sonam Kapoor and Anand Ahuja's wedding planner in an interview with news agency IANS revealed how his team put together the big fat Bollywod wedding, which no one can stop talking about. Photos and videos from Sonam Kapoor's wedding ceremony and reception gripped the Internet for the past week. Videos of celebs such as Shah Rukh Khan, Salman Khan, Ranveer Singh, Kareena Kapoor, Akshay Kumar dancing like no one's watching went crazy viral. In between the entire hullabaloo, Sonam Kapoor invested all her energy in enjoying herself, her wedding planner told IANS. "Sonam is an amazing person and her warmth can definitely bring life to any celebration. She was just enjoying herself and left all the decision-making to the family," Bhavnesh Sawhney, one of the directors of wedding planning agency Wedniksha, told IANS.

"It is the first wedding at their house and so everyone was really excited and was part of the planning and preparations. Since it was a Punjabi wedding, Punjabi singers like Mika Singh and Gurdeep Mehndi hit the right notes to create a vibe, making every guest hit the dance floor," Mr Sawhney added. Gurdeep Mehndi was invited to the mehendi ceremony, which took place on the eve of wedding, while Mika Singh enthralled the guests at the reception.

Apart from the guests, Sonam Kapoor's family members such as dad Anil Kapoor and cousins Arjun and Anshula Kapoor performed for the couple at the reception. Anil Kapoor recreated his iconic My Name Is Lakhan moment while Arjun and Anil Kapoor danced to Tune Maari Entryaan from the former's film Gunday. "Anil Kapoor and family are known for their unconditional love and hospitality. They wanted us to extend the Kapoor touch in every element of the wedding. The wedding was all about love and celebrating this special occasion with friends and family," said Mr Sawhney.

The Kapoors and the Ahujas decided on traditional Indian attire in shades of white as the dress code for the mehendi ceremony. Speaking about their choice of colour, Wedniksha's co-owner said: "We are not in the era of superstitious beliefs anymore. I guess, it was a unanimous decision to keep white as the theme and everyone did look gorgeous."

On Friday, Sonam Kapoor shared a thank you note for her family for making wedding a huge success.

Our Family is our strength.. thanks so much @kapoor.sunita you're the best mom in the whole wide world for making this happen in such a spectacular fashion! Daddy for being so such an amazing host and loving Anand and I so unconditionally @anilskapoor @priya.ahuja27 for going out of your way to do everything and making sure Anand and I get everything we desire! Harish Papa for being our rock of Gibraltar! @rheakapoor for being my best friend and partner and making sure my wedding was a success! @harshvardhankapoor you are my knight in shining armor, you effortlessly took on every responsibility and made sure all our guests were looked after, I love you so much! Pallo, for working tirelessly through and being my third parent! I love you @shehlaa_k @sandeepkhosla @anamikakhanna.in @karanjohar @farahkhankunder @abhilashatd @missdevi for being such amazingly supportive friends who are like family! @poonambhambhani for being an ace mami! My gorgeous Masi @kaveeta.singh for being uber generous and treating me like her own daughter! @ase_msb for bringing the house down with @madstarbase ! @Neeha7 for being my shadow and never leaving my side. @karanboolani for being my brother and best friend! Also to all our friends and family who made it from far and wide at such short notice Anand and I love each and every one of you for loving us enough to want to make it for our big day! Love you all!

Bhavnesh Sawhney added that maintaining privacy wasn't easy. "We had to make earnest requests to all to keep it to themselves. Sonam and Anand's wedding has been one of the biggest celebrity wedding celebrations which we have witnessed in almost a decade."

Promoted
Listen to the latest songs, only on JioSaavn.com
Sonam Kapoor and Anand Ahuja's wedding festivities ended with a reception on May 8. Sonam is currently gearing up for her date with the Cannes Film Festival. After Cannes, she'll get busy with the promotions of Veere Di Wedding, which releases on June 1.