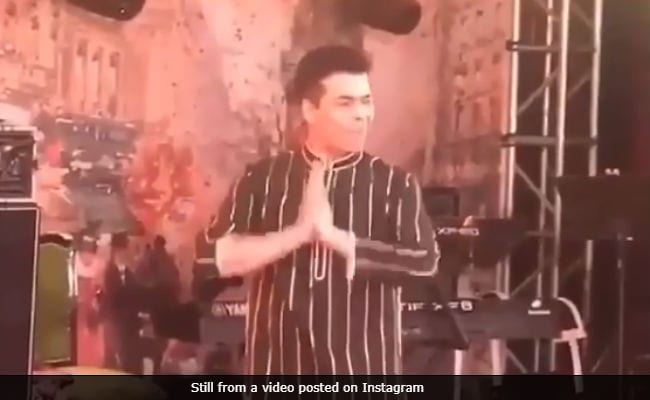 New Delhi: How do you get Karan Johar invited to your sangeet - by sending him an invite, he told a Twitter user (whose bio says she's a journalist). In case you're wondering why would you want Karan Johar on your sangeet or any other wedding function then you've not seen his mindboggling performance on Prem Ratan Dhan Payo title rack at Sonam Kapoor and Anand Ahuja's reception. The filmmaker danced to Sonam's popular song amid loud cheers from the audience comprising the creme de la creme of Bollywood (more about that later). KJo was bang on with the twirls and thumkas. He also danced to a medley of songs from his films, including Saajan Ji Ghar Aaye (from Kuch Kuch Hota Hai) and Shava Shava (from kabhi Khushi Kabhie Gham).

Now, stop everything and watch Karan Johar's performance, which promoted the tweet:

Again, Karan Johar says send him an invite if you want him at your wedding:

Just invite me!!! Will be there! https://t.co/pZTyKVtlkU

Karan Johar's dance skill is no secret to anyone who has seen him on TV show Jhalak Dikhhla Jaa, which he co-judged. He recently featured in headlines after videos of him dancing at Sandeep Khosla's niece Saudamini Mattu's reception went viral. Karan Johar danced to Radha from Student of The Year, which made him one of the top performers of the evening (including Shweta Bachchan Nanda and Sara Ali Khan).

Promoted
Listen to the latest songs, only on JioSaavn.com
Sonam Kapoor married longtime boyfriend Anand Ahuja in a traditional Sikh ceremony on May 8, which was followed by a grand reception in the evening. Bollywood A-listers including Amitabh Bachchan and Aamir Khan attended the anand karaj in the morning while stars like Shah Rukh Khan, Salman Khan, Kajol, Kangana Ranaut, Aishwarya Rai Bachchan attended the reception.